Over the past several years, NCARB and the National Organization of Minority Architects (NOMA) have released a series of reports exploring impediments throughout early architecture career phases. The first three reports focused on components of the licensure process: earning a degree, gaining experience, and taking the licensing exam.

The reports are based on the results of a survey conducted in early 2020, which was taken by over 5,000 licensure candidates, recently licensed architects, and individuals who’d recently stopped pursuing a license.

Many key findings from the report highlight the disparities faced by people of color related to firm culture, including discrimination and belonging in the workplace. 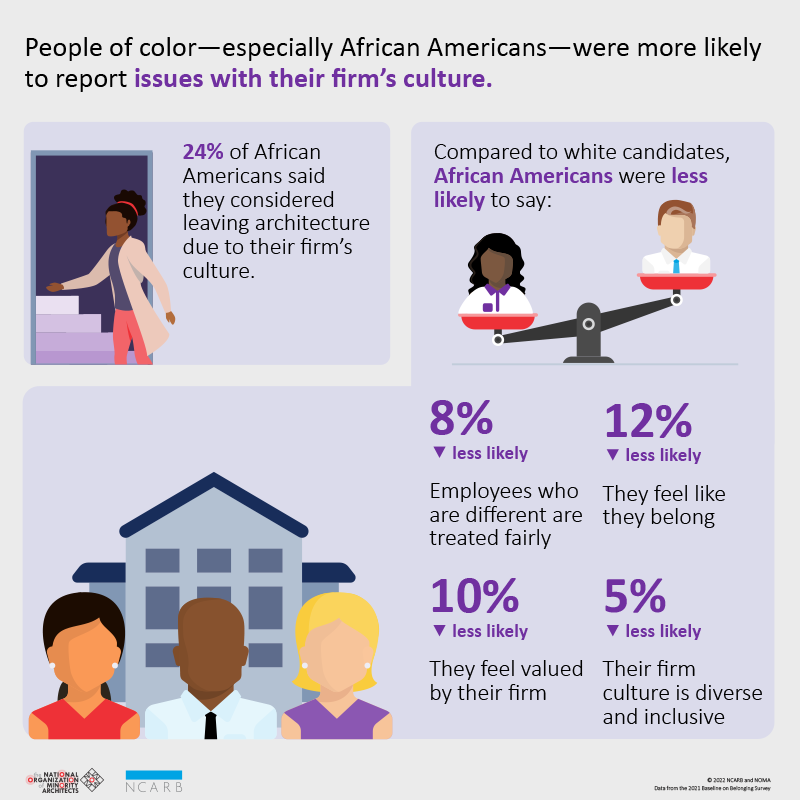 People of color, especially Black or African American respondents, were more likely to face a series of difficulties related to their firm culture. Compared to their white peers, they were less likely to feel like they belonged or feel like they were valued by their firm. Ultimately, nearly one in four African American respondents indicated they had considered leaving the architecture profession due to their firm’s culture. 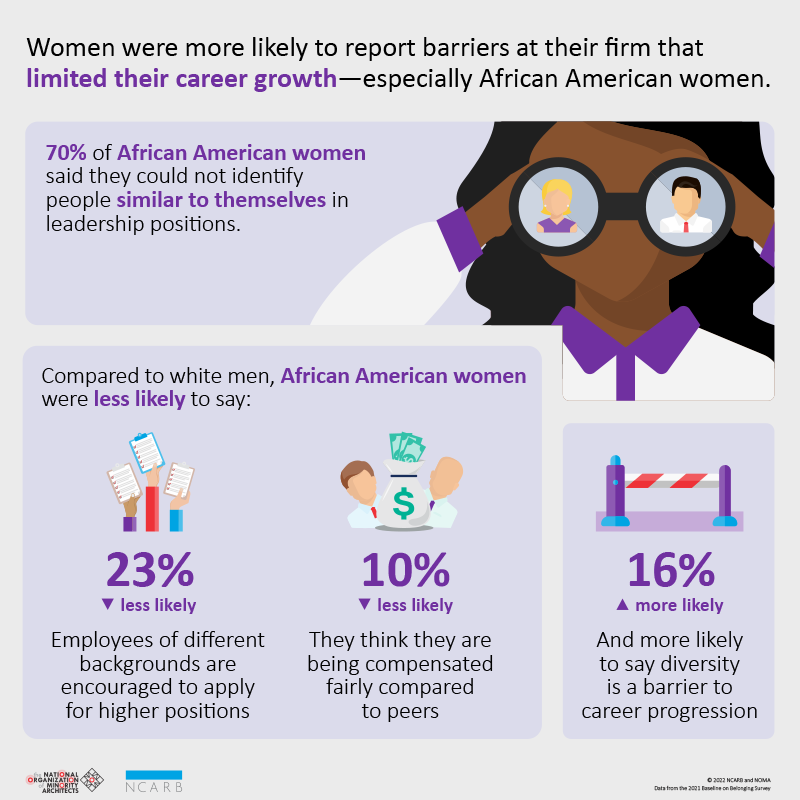 Across racial and ethnic groups, women were more likely to encounter issues that limited their career growth—such as not being encouraged to apply for higher positions and uncertainty if they were being compensated fairly compared to their peers. These barriers were most significant for Black or African American women. 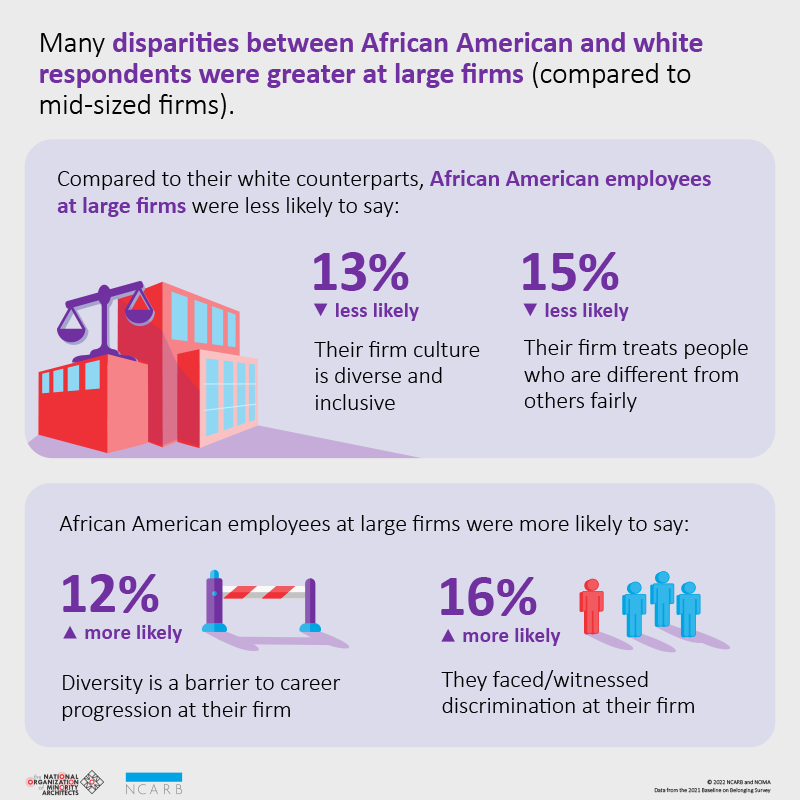 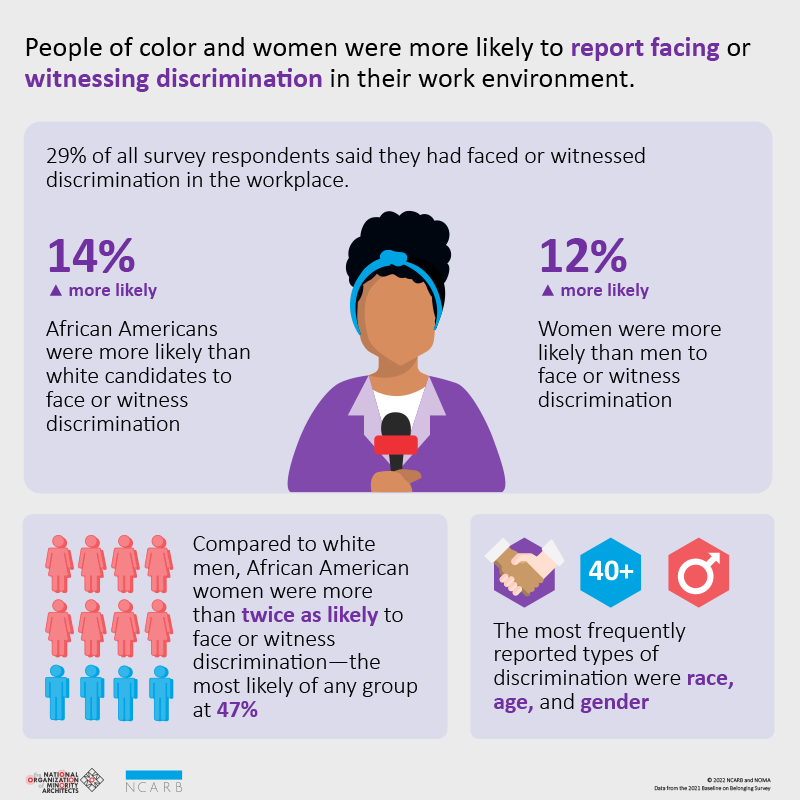 Women and people of color were more likely to indicate they had faced or witnessed discrimination in the workplace compared to white men—with gender-, race-, and age-based discrimination being the most commonly reported types seen by survey respondents. 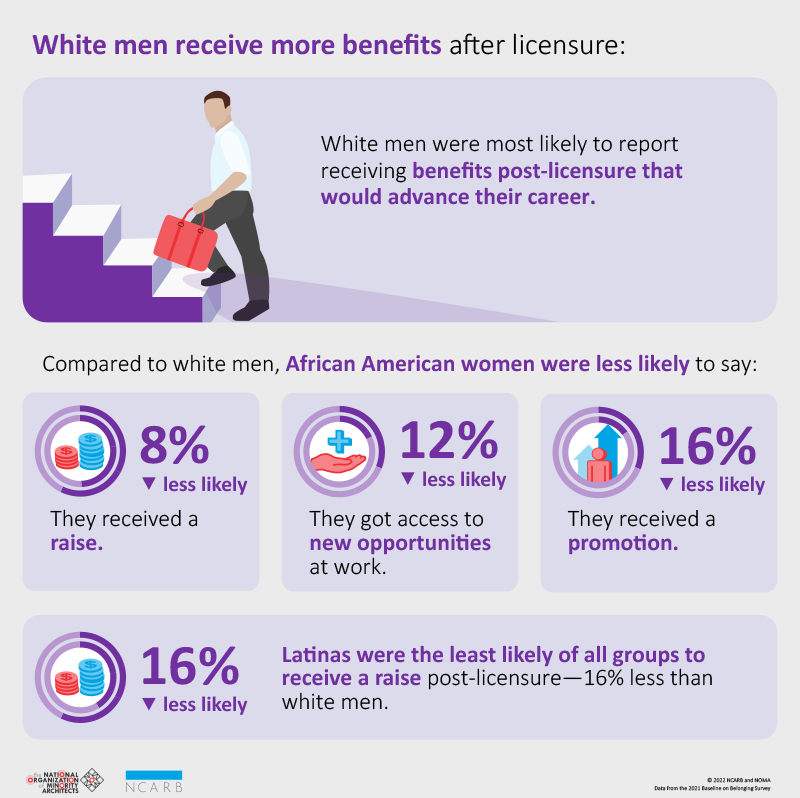 Finally, women of color were less likely to receive material benefits after licensure compared to white men—who were the most likely to report receiving a raise, promotion, or new career opportunity after becoming an architect.

NCARB and NOMA are working to create an action plan that will identify further steps that key stakeholders in the architecture profession can take to address disparities highlighted throughout the Baseline on Belonging study. To develop these action plans, the two organizations have been hosting a series of virtual and in-person focus groups aimed at brainstorming actionable solutions. Be on the lookout for more information in the months ahead!

Want to receive the latest updates? Sign up to receive our newsletter.