In 2016, the number of candidates combining the Architect Registration Examination® (ARE®) and AXP reached an all-time high, and the average candidate took just over two years to pass the exam. Candidates are also testing more often, although the number of ARE completions dropped slightly from the previous year. In part, this is tied to a small dip in pass rates, and consequently, a growing demand for retakes. 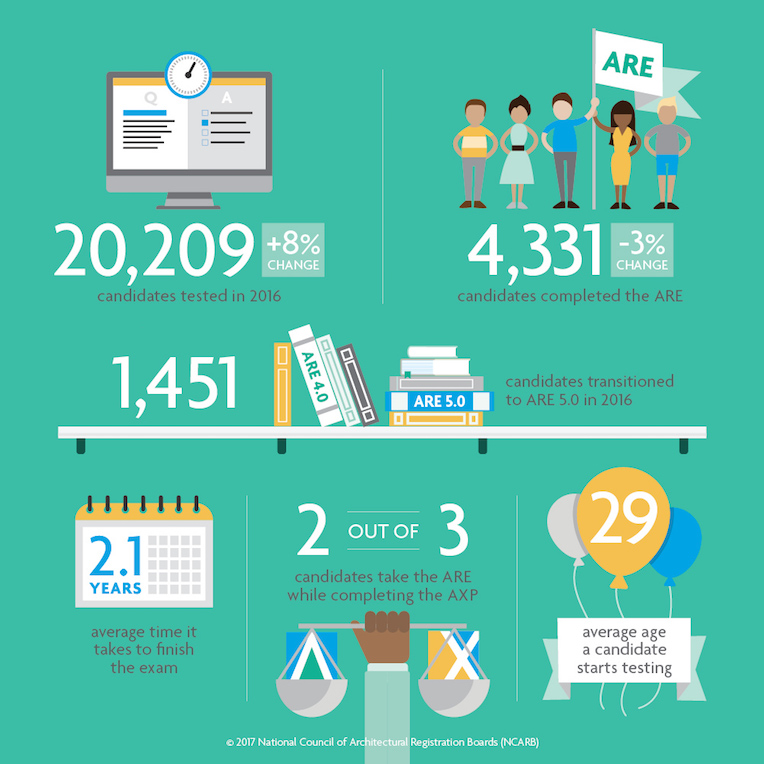 Not surprisingly, several of these trends are driven by the November 2016 launch of ARE 5.0. Throughout 2015 and 2016, many candidates decided to finish in ARE 4.0, while others chose to test strategically by taking a combination of both versions.

Over 4,300 candidates completed the ARE in 2016—a slight drop from the previous year, but still the second-highest on record. This year-on-year dip is likely caused by candidates waiting for the November 2016 launch of ARE 5.0, as many testing in ARE 4.0 chose to take a combination of both versions. By taking key divisions in 4.0 and 5.0, candidates can complete the exam in as few as five tests. In fact, 1,332 candidates had already transitioned from 4.0 to 5.0 by the end of December.

Note: This data only includes ARE 4.0 completions.

Time to Complete the ARE Remains Steady

The average candidate took 2.1 years to complete the ARE in 2016. While this timeframe remains unchanged from 2015, candidates overall are passing the exam—and getting licensed—sooner (see Time to Licensure Continues to Improve).

The drop in 2015 is likely tied to NCARB’s new retake policy, which went into effect October 2014. Before then, candidates had to wait six months to retake a failed division. Now they can retake an exam in as few as 60 days and up to three times a year.

Generally, pass rates dipped slightly in 2016—particularly among two key divisions: Construction Documents & Services (CDS) and Programming Planning & Practice (PPP). By combining specific ARE 5.0 divisions with CDS and PPP, candidates can complete the exam in as few as five tests. The recent drop in pass rates for these divisions is likely the result of more candidates hurrying to complete these key divisions in ARE 4.0 before the exam retires in June 2018.

For the fourth consecutive year, the number of ARE divisions taken by candidates increased. In 2016, more than 54,000 divisions were administered, representing a 3 percent bump from 2015. This growth is likely tied to the November 2016 launch of ARE 5.0, as candidates seek to complete the exam in ARE 4.0 or a combination of both versions.

Retakes represent a significant portion of this growth, as nearly 17,500 retakes were administered in 2016—a 9 percent increase from the previous year. This growing demand is likely tied to NCARB’s updated retake policy, which enables candidates to retake a division in as few as 60 days and up to three times a year.

Record Number of Candidates Overlap the ARE and AXP

Of the licensure candidates who completed the ARE in 2016, 67 percent took at least one exam while completing their experience—the largest percentage to date. As the path to licensure becomes more flexible, this upward trend will likely continue. Currently, 50 of the 54 licensing boards allow an overlap between gaining experience and examination.

Candidates who take the ARE within a two-year window before completing the AXP tend to have the highest success rates. This could be driven by an overlap in subject matter, as both programs address the knowledge and skills required to practice independently. Plus, candidates invested in wrapping up the AXP may be more focused on completing the path to licensure.

Note: This data represents licensure candidates who completed the AXP between 2014 and 2016.