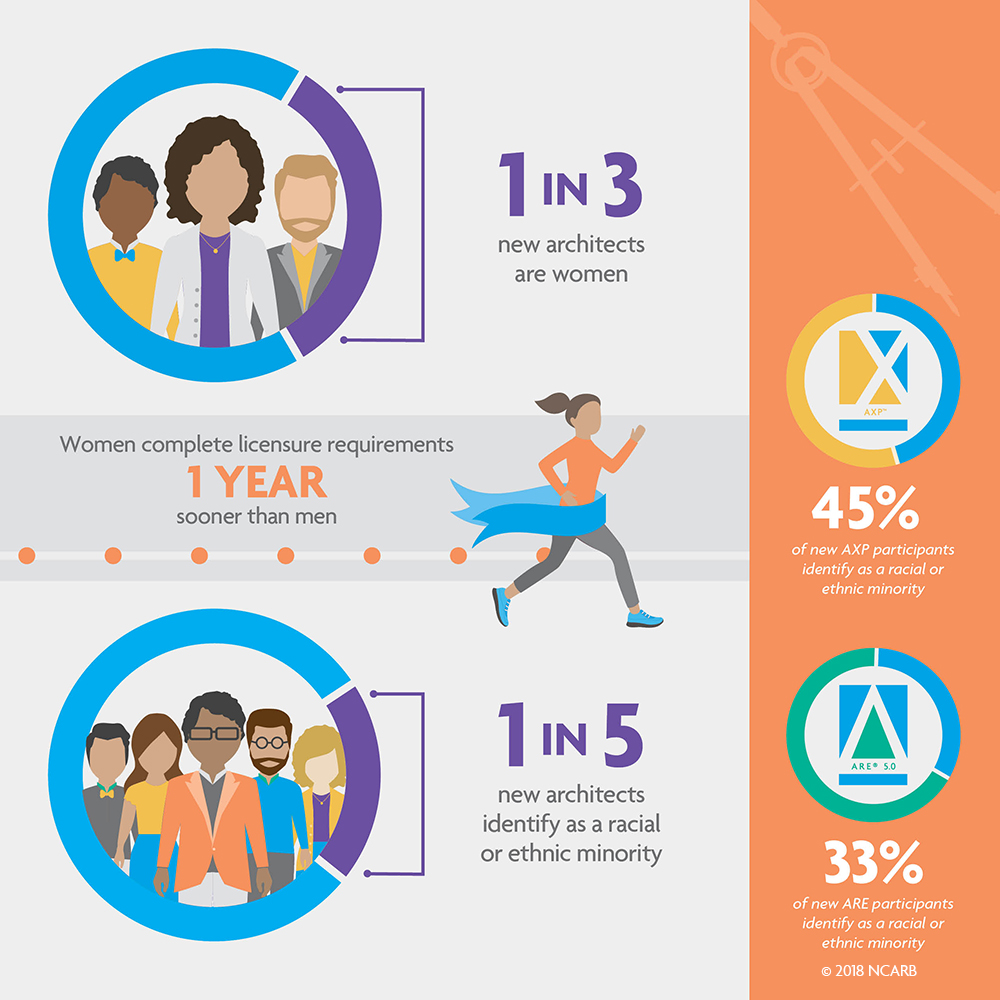 Although several groups remain underrepresented within the profession, trends continue to point to growing diversity among licensure candidates, and eventually, future architects.

Gender equity remained largely unchanged over the course of 2017, with minimal increases and decreases at various career stages. In 2017, women accounted for 46 percent of new AXP participants, 42 percent of new ARE candidates, and 35 percent of candidates who’ve completed the major requirements for licensure. By comparison, women made up 47, 42, and 36 percent, respectively, of these groups in 2016.

In 2017, women represented 41 percent of AXP completions, the highest proportion on record. Gender equity in AXP completions has been improving for the past four years, potentially impacted by several program changes designed to remove unnecessary hurdles—the first of which (allowing candidates to report experience older than six months for 50 percent credit) was introduced in July 2014. Other changes include a reduction in the AXP’s required hours (2015) and the re-alignment of experience areas (2016).

ARE Completions by Women Fall Slightly

Women accounted for 37 percent of ARE completions in 2017, the second highest on record and the same proportion seen in 2015. While this represents a slight dip from 2016, gender equity has been steadily improving over the last decade. The proportion of women completing the exam in 2017 was 7 percentage points higher than a decade ago.

In 2017, racial and ethnic diversity continued to improve along early career stages. Forty-five percent of new AXP participants and 33 percent of new exam candidates identified as non-white, a three percent increase for both groups. Individuals completing the AXP saw an even larger jump: 30 percent identified as non-white, a five percent increase from 2016. While individuals completing the core requirements for licensure saw an increase of 1 percent in 2017, this slight bump signals that the diversity in the pool of licensure candidates may be slowly moving along the pipeline.

This highlights the ongoing challenge for the profession of providing a diverse set of supervisors and mentors to act as role models for the next generation.