In 2017, the number of candidates who completed the Architect Registration Examination® (ARE®) reached an all-time high. Candidates are also finishing the exam sooner—last year, the average candidate took just two years to pass the exam. 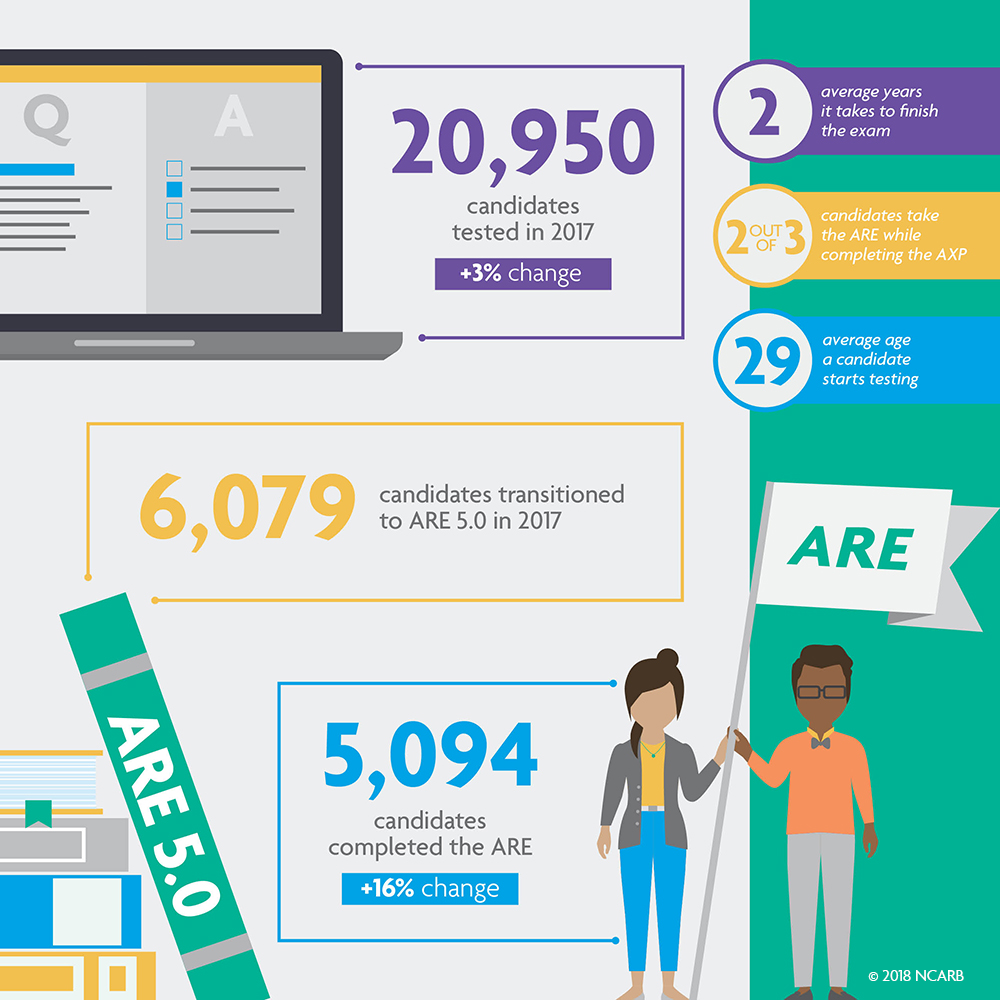 With the launch of ARE 5.0 in November 2016, many candidates worked to finish the exam before ARE 4.0’s June 2018 retirement, while others took a combination of both versions. This transitional period allowed some candidates to complete the exam in less time and fewer divisions, but it also led to an increase both in the number of retakes and the total number of tests given.

Over 5,000 candidates completed the ARE in 2017—a 16 percent increase from 2016 and the highest number on record. The reasons for this jump are likely twofold: some candidates worked to complete the exam before ARE 4.0’s retirement in June 2018, and others waited to complete the exam in ARE 5.0 after the November 2016 launch of the new version. By waiting to take strategic divisions in both versions, over 2,000 candidates have completed the ARE in as few as five tests since ARE 5.0’s launch in 2016.

Time to Complete the ARE Drops Slightly

In 2017, the average candidate took two years to complete the ARE, shaving one month off of the 2016 timeline. Like the increase in ARE completions, this slight dip is most likely a result of the transition between ARE 4.0 and ARE 5.0. Candidates taking strategic divisions in both versions completed the ARE in as few as five tests, and candidates testing solely in ARE 5.0 can complete the exam in six—one fewer than ARE 4.0.

The drop in 2015 is likely tied to NCARB’s revised retake policy, which went into effect October 2014. Before then, candidates had to wait six months to retake a failed division. Now they can retake an exam in as few as 60 days and up to three times a year

Among ARE 4.0 divisions, Schematic Design (SD) had the highest pass rate of 81 percent, and Construction Documents & Services (CDS) and Programming, Planning & Practice (PPP) had the lowest at 52 percent. This marks the sixth year in a row that SD held the highest pass rate; for comparison, the average success rate across the remaining six ARE 4.0 divisions was 57 percent.

Among ARE 5.0 divisions, Construction & Evaluation (CE) had the highest pass rate of 61 percent, and Practice Management (PcM) and Project Planning & Design (PPD) had the lowest at 50 percent. For comparison, the average success rate across all six divisions was 54 percent.

Historical trends show that ARE success rates typically drop around the launch of a new exam, as candidates hurry to finish testing in the current version. When ARE 4.0 debuted in 2008, ARE 3.1 success rates dipped about 5 percentage points. That same year, 4.0 success rates started around 55 percent, gradually climbing to the upper-sixties by 2010.

Average ARE 4.0 pass rates continued to fall in 2017 for all divisions except Schematic Design (SD). This decline is likely due to candidates rushing to complete the exam in ARE 4.0 before its retirement in June 2018.

This trend is most evident in the divisions required to test strategically: by combining specific ARE 5.0 divisions with ARE 4.0’s Construction Documents & Services (CDS) and Programming, Planning & Practice (PPP), candidates could complete the ARE in as few as five tests. Pass rates for these two divisions have dropped steadily since strategic testing was first announced in 2014.

The number of ARE divisions taken by candidates increased for the fifth year in a row. Over 56,000 divisions were administered in 2017, 2 percent more than in 2016. The entirety of this growth is seen in the 10 percent increase in the number of retakes, which is likely due to candidates seeking to complete strategic divisions in ARE 4.0 before its June 2018 retirement.

Most Candidates Overlap the ARE and AXP

Of the licensure candidates who completed the ARE in 2017, 65 percent took at least one exam while completing their experience, a 2 percentage point decrease from 2016. Despite this slight dip, 2017 is still the second highest proportion on record, and 3 percentage points higher than in 2015. This dip could be due to the spike of nearly 2,400 candidates who immediately completed the AXP in 2016 upon the program’s realignment.

Currently, 50 of the 54 licensing boards allow candidates to overlap gaining experience and taking the ARE.

Candidates who take the ARE within a two-year window before completing the AXP tend to have the highest pass rates. With the coordination between the six realigned experience areas and ARE 5.0’s six divisions, the higher pass rates suggest an overlap in subject matter expertise is beneficial to candidates. Plus, candidates invested in wrapping up the AXP may be more focused on completing the path to licensure.

Note: This data represents licensure candidates who completed the AXP between 2015 and 2017.