Just under 4,000 candidates completed the Architect Registration Examination® (ARE®) in 2019, a 21 percent drop compared to 2018. Required by all 55 U.S. jurisdictions, ARE 5.0 is a six-part exam taken by candidates seeking architectural licensure. 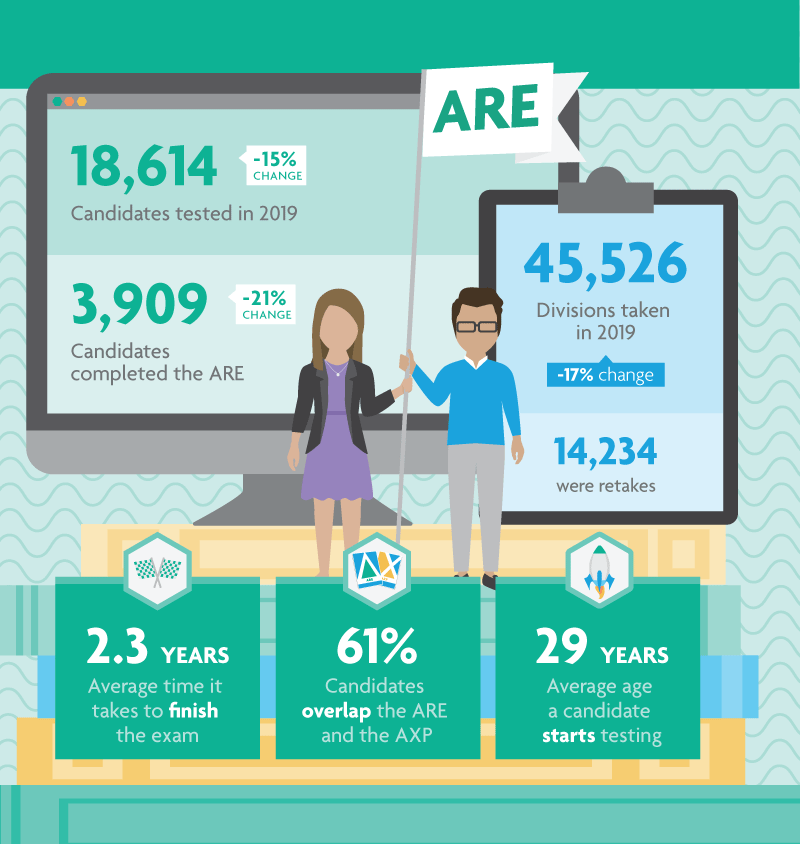 NCARB’s examination experts are constantly evaluating the exam to ensure it remains fair and appropriate.

As candidates continued to test more frequently in ARE 5.0’s strategic divisions—divisions that allow a candidate to complete the exam in fewer divisions when combined with specific ARE 4.0 divisions—and adjust to the new exam format, the number of retakes made up nearly a third of all test administrations in 2019.

In 2019, just under 4,000 candidates completed the Architect Registration Examination® (ARE®) 5.0, the national exam required for architectural licensure in all 55 U.S. jurisdictions. This is 21 percent fewer than the number of individuals who completed the exam in 2018.

Though a significant drop, 2019’s decline was expected following the well-publicized retirement of the previous version of the exam, ARE 4.0, on June 30, 2018. Without the rush to test caused by the exam transition, the number of candidates completing the ARE each year is expected to return to a level similar to those seen prior to ARE 5.0’s launch in November 2016.

The average candidate who completed the ARE in 2019 took 2.3 years, an increase of 6 percent—about one month—compared to candidates who completed the ARE in 2018. This increase was likely caused by multiple factors related to the retirement of ARE 4.0: candidates may feel less pressure to complete the exam post-transition, and the reduction in pass rates seen in conjunction with ARE 4.0’s retirement impacts overall testing timeline. Lower pass rates lead to more retakes, which extends the time it takes to complete the exam requirement.

After failing a division, a candidate must wait 60 days to retake that division, and they can take each division up to three times per 12-month period—a provision that is both necessary for exam security and encourages candidates to properly prepare before testing again. Prior to October 2014, candidates had to wait six months to retake a failed division.

Construction & Evaluation (CE) had the highest pass rate of all ARE 5.0 divisions at 70 percent, and Project Planning & Design (PPD) had the lowest at 42 percent. For comparison, the average success rate across all six divisions was 52 percent.

The passing standard for each division has remained constant since ARE 5.0 launched in 2016.

ARE 5.0 success rates (the average of all division pass rates) fell 2 percentage points between 2018 and 2019. Although historical trends show that ARE success rates typically drop around the launch of a new exam, 2019’s downward trend may indicate that candidates are finding the format of ARE 5.0 more challenging than anticipated or may misunderstand the expected level of knowledge covered in the exam.

This proved especially true for strategic testers, who opted to combine ARE 4.0 and 5.0 divisions and finish testing in as few as five divisions. 2019 saw a continued reduction in pass rates for ARE 5.0’s strategic divisions, leading to the drop in overall success rate. This is the first decline seen in ARE 5.0’s success rate since its launch in November 2016.

Pass Rates for Strategic Testing Divisions on a Declining Trend

An assessment of ARE 5.0 division pass rates reveals a continued decline in strategic testing divisions, which impacted the overall exam success rate. Strategic divisions are those which, when combined with strategic ARE 4.0 divisions, enabled candidates to complete the ARE in as few as five tests.

NCARB’s staff, expert volunteers, and testing consultants continuously evaluate ARE 5.0 results to ensure that the exam is fair, valid, and measures an appropriate level of competency.

The average pass rate for all ARE 5.0 divisions is higher for first attempts than it is for retakes—divisions administered after a candidate fails their first attempt on the same division.

The largest difference in pass rates for retakes compared to first attempts was seen on the Construction & Evaluation division, which saw an 11 percentage point decrease in average pass rates.

The smallest difference in pass rates was seen on the Practice Management and Project Planning & Design divisions, each of which saw a 3 percentage point decrease in average pass rates following the first attempt. Interestingly, these proved to be the hardest divisions to pass on the first attempt.

The total number of tests administered fell in 2019, as candidates took a total of 45,526 divisions—a 17 percent drop compared to 2018. Reasons for the decrease could include fewer candidates in the testing pool after the record number of exam completions in 2017, and less pressure to test following ARE 4.0’s retirement in 2018 (an anticipated result of the exam transition).

Over two-thirds (31,292) of the tests administered in 2019 were first-time attempts. The remaining third (14,234) were retakes—divisions administered after a candidate fails their first attempt on the same division.

Construction & Evaluation had the fewest administrations in 2019, its distinction from the other divisions influenced by high pass rates that limited the number of retakes necessary.

Most Candidates Overlap the AXP and ARE

Of the licensure candidates who completed the ARE in 2019, 61 percent took at least one division while completing their experience. This is a 2 percentage point decrease compared to 2018, and marks the third year of decline in a row. The drop could be a result of the alignment between the AXP and ARE, which could encourage candidates to defer testing until they’ve completed the related experience.

Currently, 52 of the 55 licensing boards allow candidates to overlap gaining experience with taking the ARE.

This indicates that beginning the ARE before earning a significant amount of professional experience will decrease a candidate’s likelihood to pass. While most candidates overlap the AXP and ARE at some point during their licensure process, the vast majority of ARE divisions are administered after a candidate has completed the required hours for the experience program area.

Candidates who take the exam shortly before completing the experience program tend to have the highest ARE success rates. With the coordination between the six realigned experience areas and ARE 5.0’s six divisions, the higher pass rates near the culmination of the experience program suggest an overlap in subject-matter expertise is beneficial to candidates. Plus, candidates invested in wrapping up the AXP may be more focused on completing the path to licensure.

Age at ARE Completion Decreases Slightly