To celebrate DC Architecture Week, we asked NCARB staff to share their favorite local architecture. You can also take part by attending one of AIA|DC’s many events. With walking tours, book signings, and photography exhibitions, there’s something for everyone! 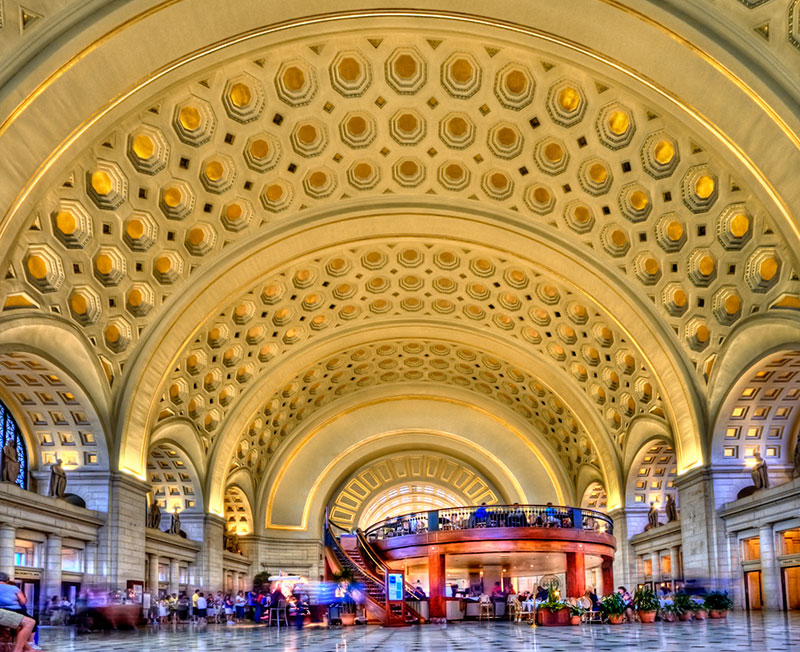 Union Station
Even though I’ve walked through Union Station dozens of times since moving to Washington, DC, I still find the space inspiring. Especially when I remove myself from the commuter mindset and take a moment to simply enjoy the walk up the curved marble stair, peering up to the vaulted ceiling two stories above. [Photograph by Flickr user Pedro Szekely]
— Jared N. Zurn, AIA, NCARB; Director, Examination 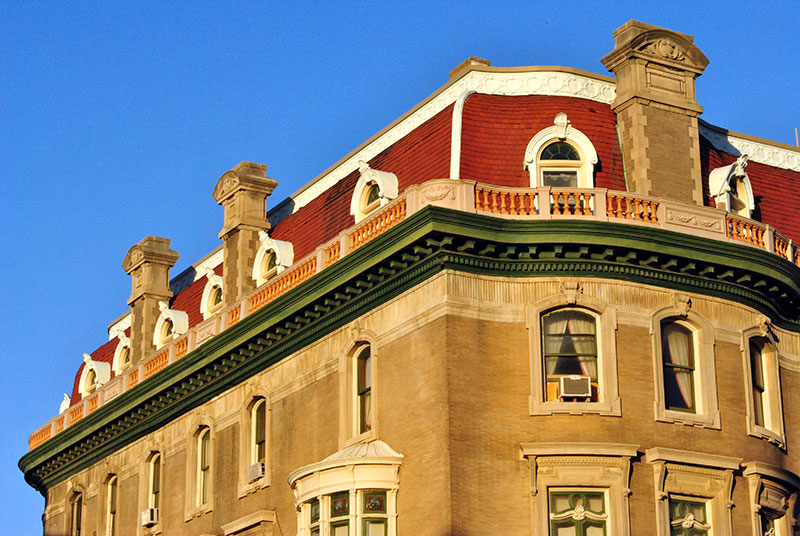 Embassy of the Republic of Indonesia
The Indonesian Embassy is a former private, beaux-arts residence—and by residence I mean huge mansion—with an interesting history and a lot to see. It is one of the older homes on Embassy Row and the most impressive to tour, if you ever get a chance. [Photograph by Flickr user Angela N.]
— Amanda Pica; Senior Writer 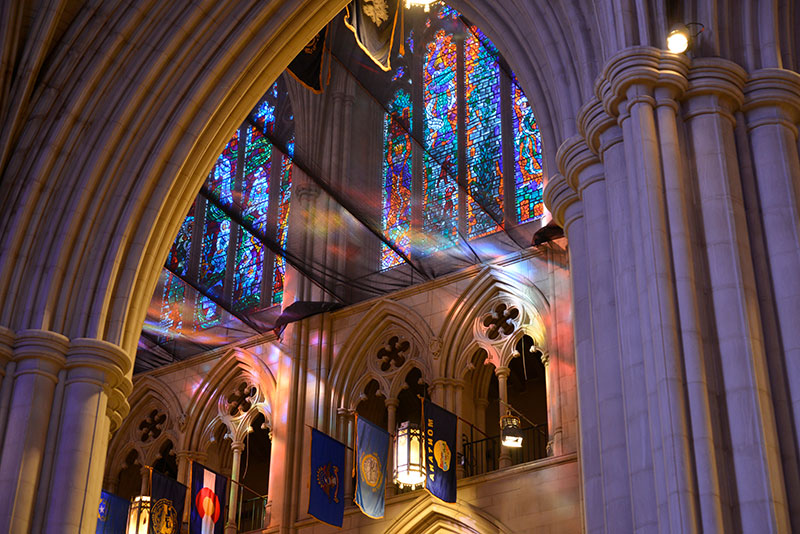 The Washington National Cathedral
My favorite aspect of the National Cathedral is the stained glass “Scientists and Technicians Window,” which commemorates America’s exploration of space. There’s actually a piece of the moon in the center of the window! To me, it represents the true culmination of science and religion. [Photograph by Flickr user cisc1970]
— Kimberly Tuttle, AIA, NCARB; Outreach Manager, Internship + Education 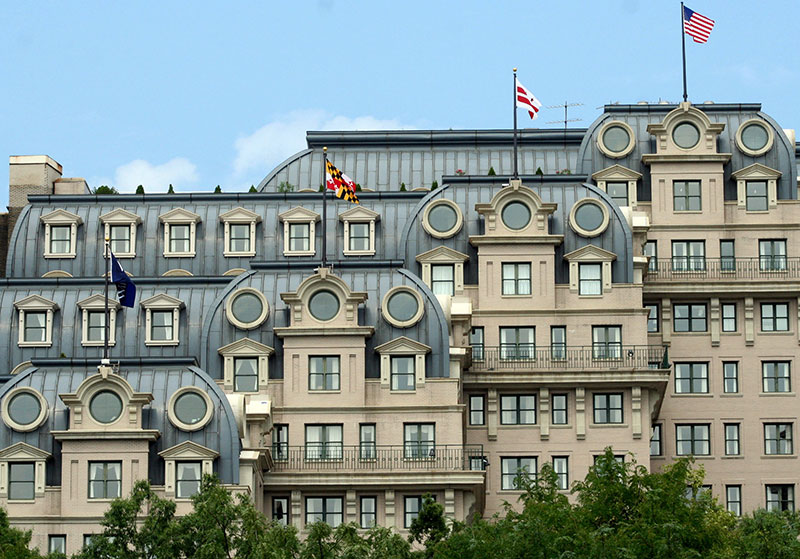 The Willard
I love the architecture of the Willard hotel near the White House. The mansard roof and ornate window pediments make this building stand out against its neighbors. [Photograph by Flickr user David]
— Jennifer Renken; Quality Assurance Analyst 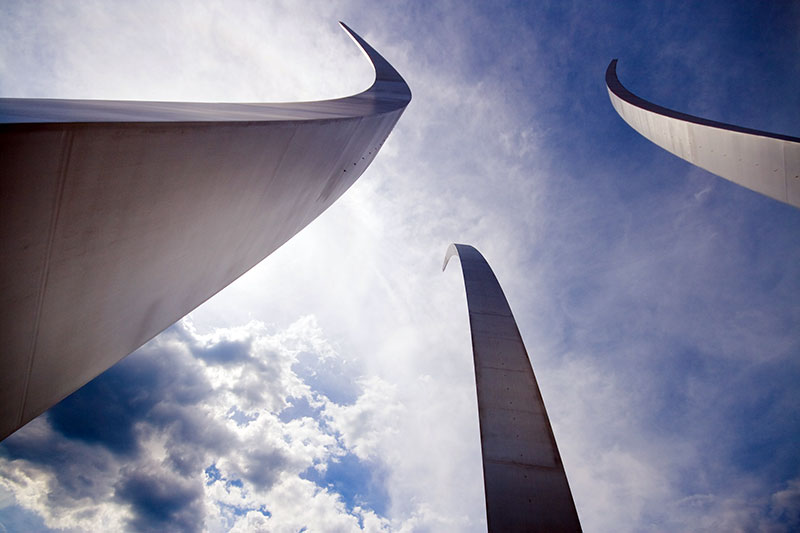 Air Force Memorial
The Air Force Memorial stands tall and inspiring next to Arlington National Cemetery. It is in constant dialogue with the sky and lends itself to some amazing photographic angles. Whether I am up close or viewing it from a distance, the symbolism reminds me to be grateful to those who serve in the Air Force. [Photograph by Flickr user Danny Fowler]
— Bill Johnson; Manager, Examination Development 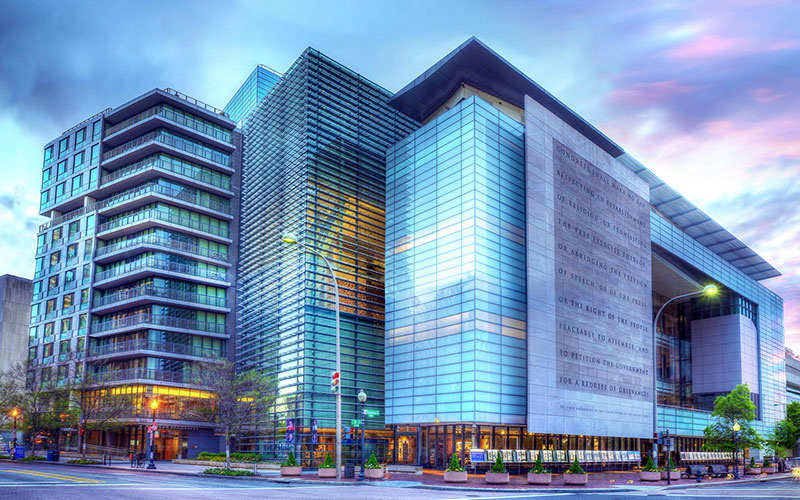 Newseum
The museum is an awesome structure with an open concept that reflects the transparency promoted by the First Amendment. [Photograph by Maria Bryk/Newseum]
— Brian Frickert; Senior Database Administrator 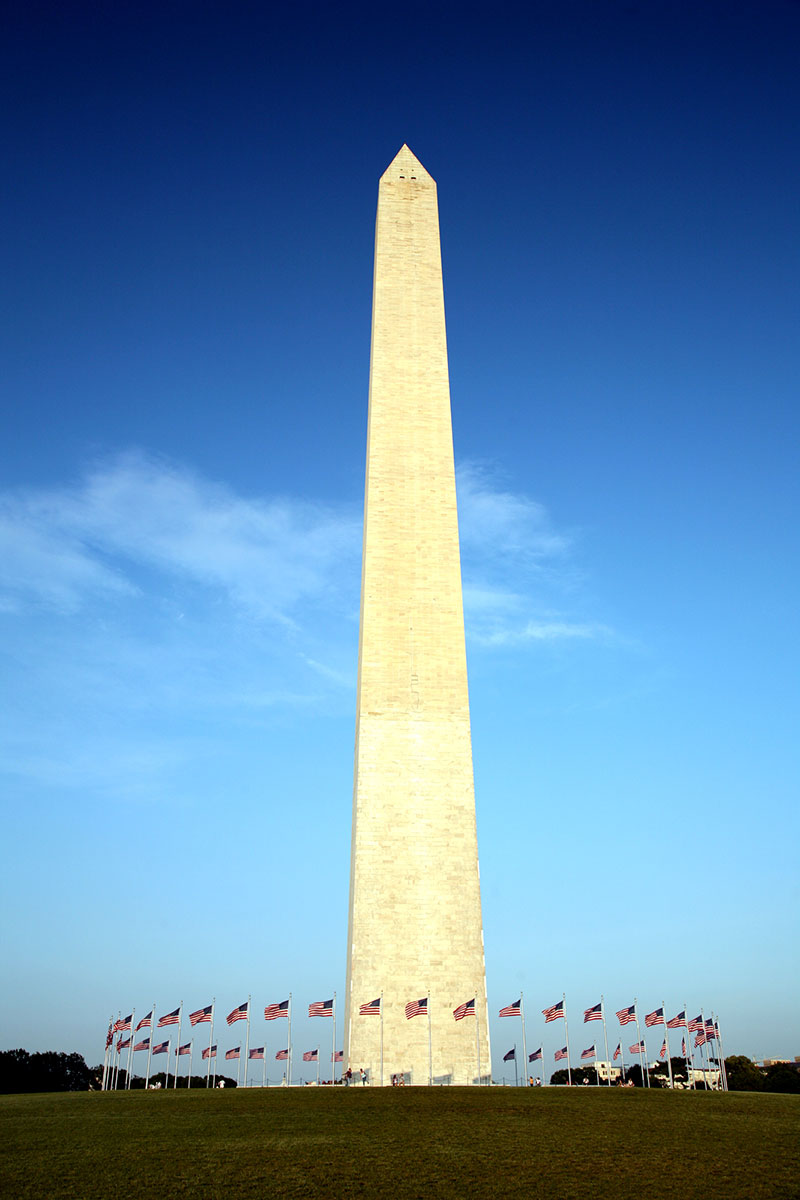 Washington Monument
One of my favorite architectural gems in DC would have to be the Washington Monument. Its beauty and history really showcase what the city is all about. [Photograph by Flickr user Art Around]
— Michael Katz; Manager, Examination Development 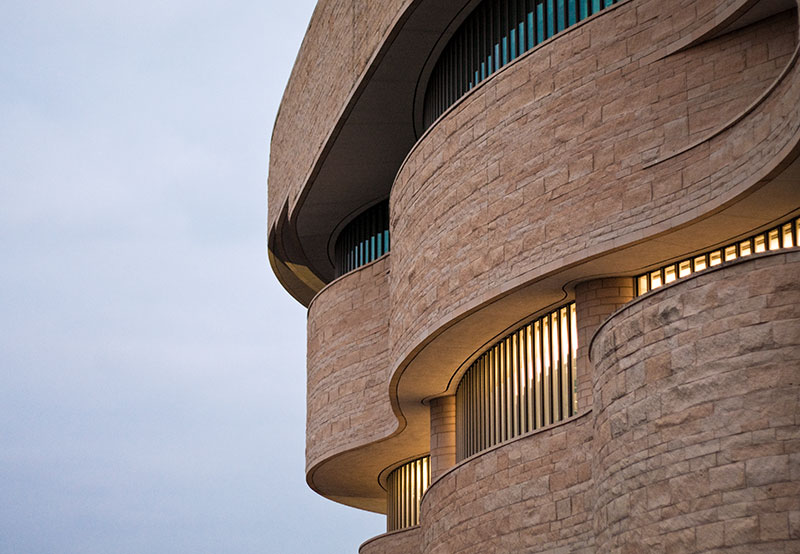 The National Museum of the American Indian
I love the curves of the design. Many people don’t know that the building is perfectly aligned to the cardinal directions and the center of the Capitol dome. [Photograph by Flickr user ep_jhu]
— Megan McDonald; Customer Relations Specialist 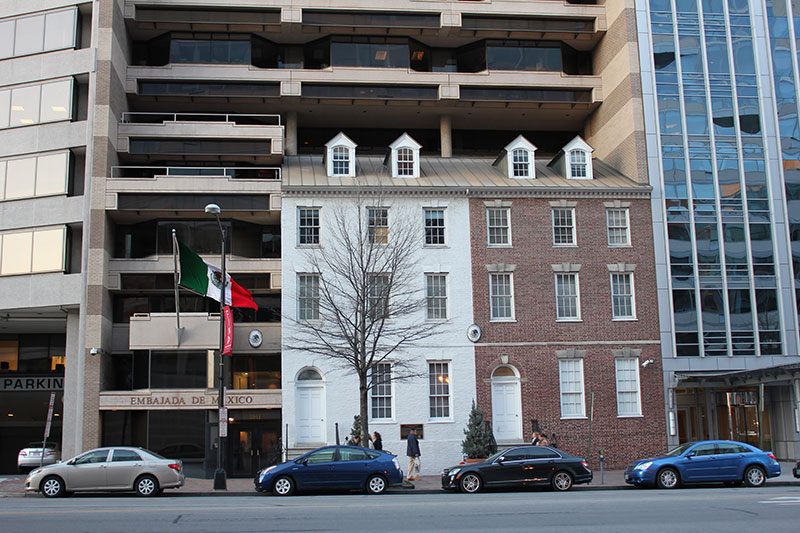 Embassy of Mexico
The Embassy of Mexico brings old and new together, but refuses to blend them. In an age where many new buildings try to create a faux-age or blend with the context, the complete rebellion against compromise is refreshing and exhilarating. By setting both elements in stark contrast to one another, the design also highlights each architectural style more substantially and independently. [Photograph by Flickr user Jessica]
— Nick Serfass, AIA, NCARB, LEED AP, PMP; Assistant Director, Internship + Education 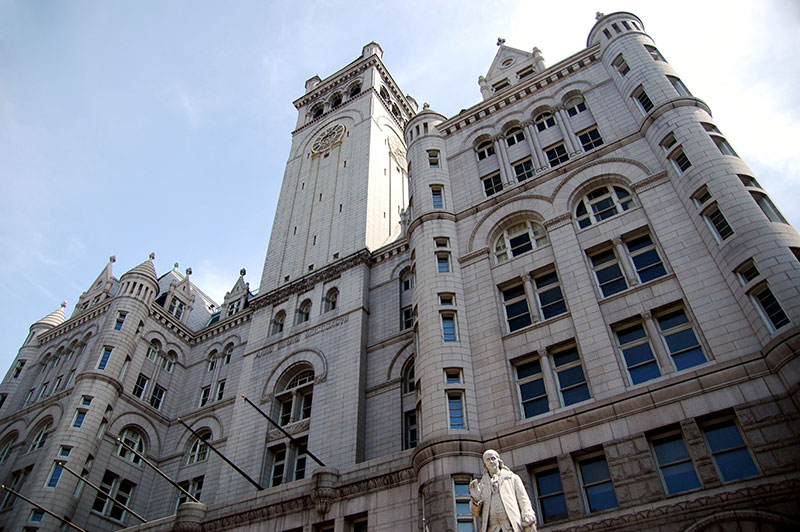 Old Post Office Pavilion
My love of this building might have something to do with my background in classical architecture and my interest in historic preservation. The structure is rich in history and character. [Photograph by Flickr user Jeff Kubina]
— Michelle Kinasiewicz, AIA, NCARB, LEED APBD+C; Assistant Director/Internship + Education 800 North Glebe
One of the first places that comes to mind is 800 North Glebe Road in Arlington, VA. If you're ever on the corner of North Glebe and Wilson, take a moment before the traffic light turns green to appreciate it. The building makes a strong and modern statement, and it feels like a trophy in the Ballston skyline. [Photograph by Flickr user Ron Cogswell]
— Lou-Ann Belk; Graphic Designer 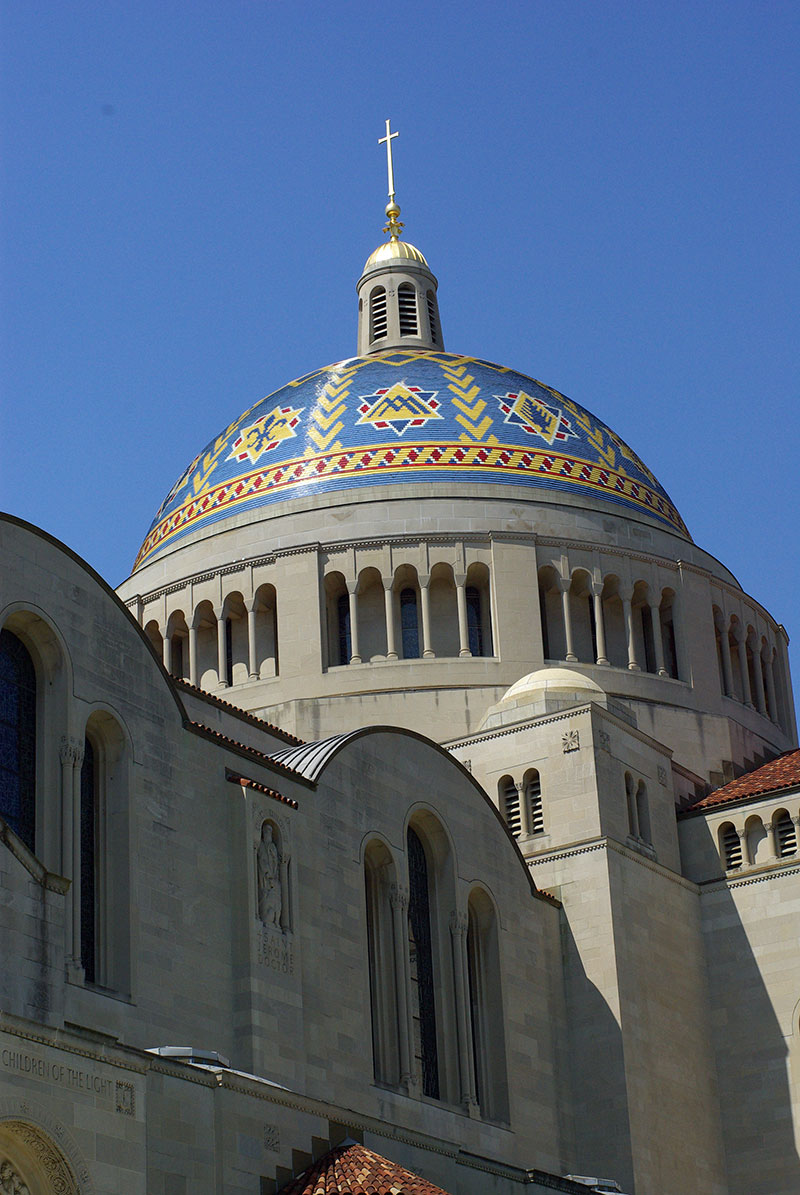 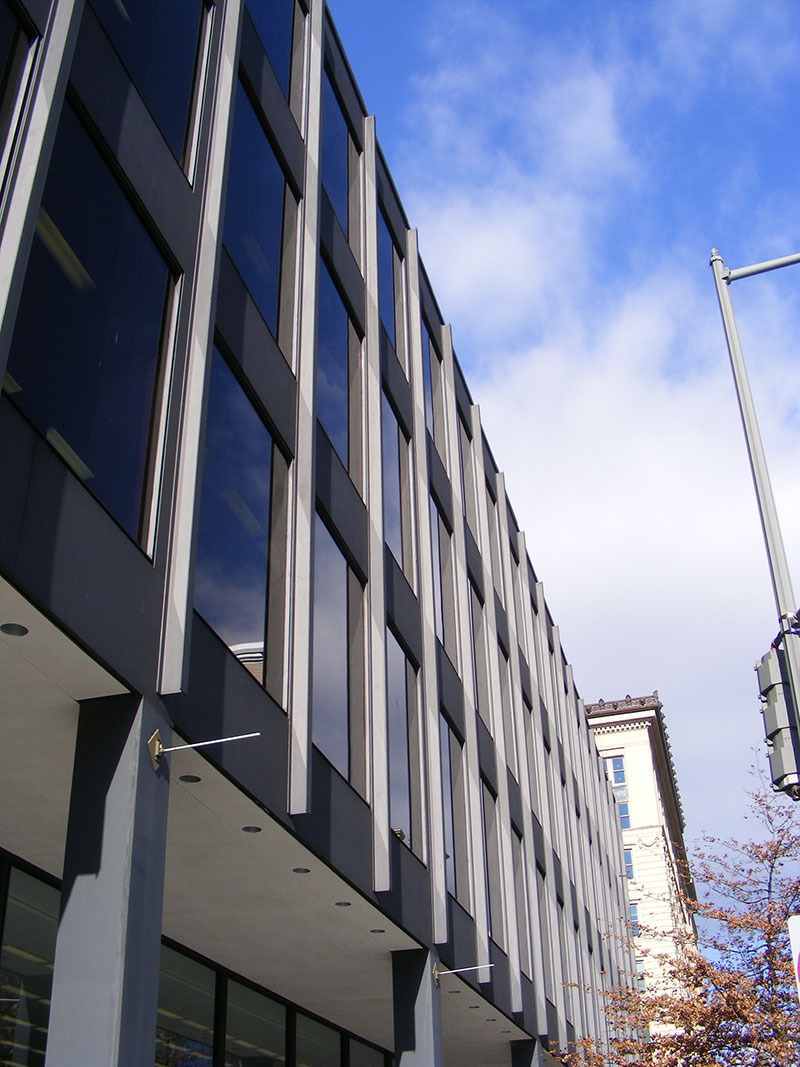 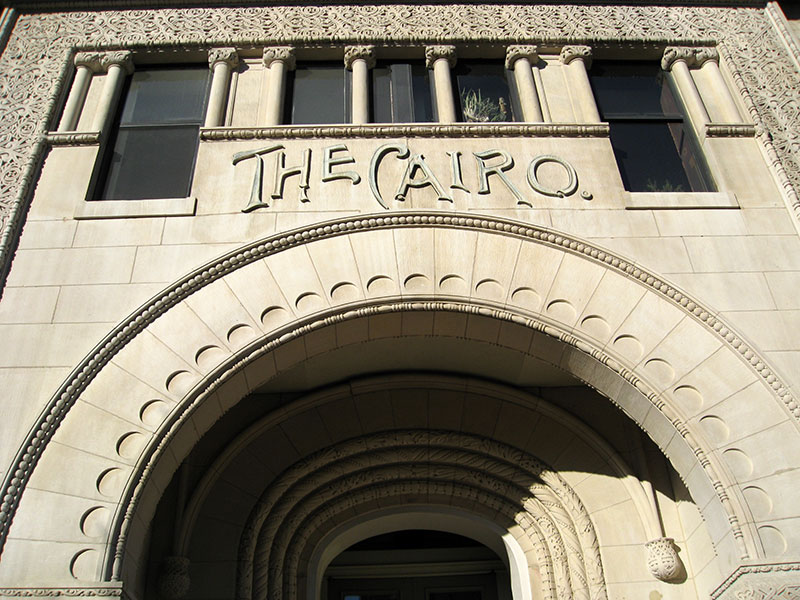 Cairo Condominiums
At 164 feet, the Cairo is the tallest residential building in DC. When it was completed in 1894, it towered above other buildings in the area, spurring the creation of DC’s Height of Buildings Act. Along with its noteworthy size, the Cairo has a unique Egyptian theme that combines Moorish and Romanesque Revival features. [Photograph by Flickr user Adam Gerard]
— Allison Smith; Administrative Assistant, Council Relations 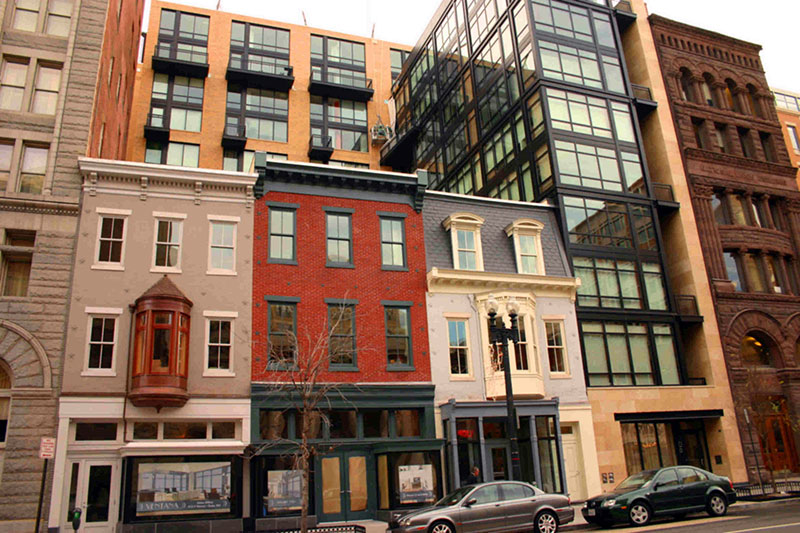 912 F Street
These residences are an overlooked modern gem of infill between two historic structures that elegantly fades in the background due to its simplicity and clean lines. [Photograph by Flickr user Elvert Barnes]
— Stephen Nutt, AIA, NCARB, CAE; Sr. Architect/Advisor to the CEO

A Brief History: The National Organization of Minority Architects

A Brief History: The National Organization of Minority Architects

NCARB is monitoring the Coronavirus and is committed to doing everything we can to support you. Learn more.