NCARB is celebrating its centennial in 2019! As a part of the celebration, we will be posting articles from our archives to remember the history and evolution of the organization. A version of this article originally appeared in a 1951 edition of the NCARB newsletter National Architect.

Lucille Bryant Raport, architect for "Tomorrow's House," is nationally known for her prize-winning designs. She is past president of Architects of San Fernando Valley, an affiliate of The American Institute of Architects (AIA), and an honorary member of the Building Contractors' Association, San Fernando Chapter.

California's San Fernando Valley doffs its hat to one of the country's leading architects at the opening of the model home for the Valley Youth Foundation. Planned by Lucille Bryant Raport, AIA, whose contemporary designs are exemplified by the famous Lockheed Guest House at Lake Arrowhead and the Arnold Kahn home in Toluca Lake, the model home is an outstanding contribution to California's distinguished architecture.  Raport was chosen to serve on the joint committee of the AIA and National Association of Home Builders as a result of her architecture in the field of merchant building.

Her distinguished career began when the University of Kansas awarded her the Thayer Medal for outstanding merit in architectural design in 1941. In 1944 she went to California and, after the end of the war, opened her office in North Hollywood. Because of her special knowledge of design and planning, the Building Contractors' Association, San Fernando Chapter, made Raport an honorary member, the only woman to be so honored.

With three university degrees to her credit, Raport is one of the few architects to be listed in “Who's Who” columns in the Pacific Coast and Los Angeles.  She is a member of the Board of the North Hollywood Chapter of Zonta International, an outstanding service club of executive and professional women. She is former president of the Architects of San Fernando Valley, and of the Los Angeles Chapter of the Association of Women in Architecture.

"Tomorrow's House" has been planned after a study of American family living at its best, and with particular emphasis on the advantages of home life offered by the San Fernando Valley.  The 1,800 square feet of flexible living area has a living room, dining room, kitchen, den, two bedrooms, and two baths. Floor-to-ceiling accordion walls between the den and living room can be opened to accommodate large groups for family entertaining. When privacy is desired, the den may be closed off and used as a study or guest room. 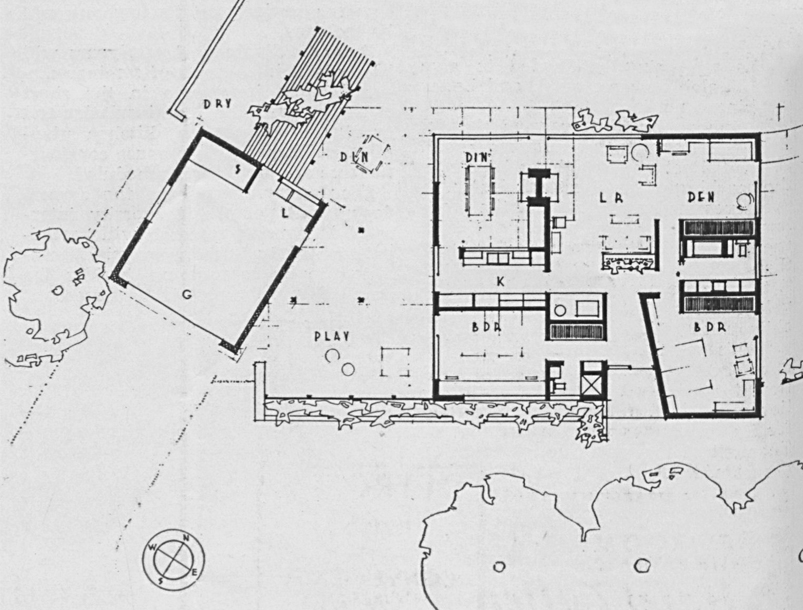 The omission of doors provides a free flow of space within the kitchen-dining-living area. Wide expanse of floor-to-ceiling glass makes this home the sun's living quarters.  The specially constructed double fireplace may be used for intimate dining or for warmth when entertaining in the living area.  Outdoor dining, an integral part of the San Fernando Valley, is featured in "Tomorrow's House" by the protected dining terrace. A special and unique advantage is an enclosed patio for each room.

The children's room and play yard have been planned to facilitate supervision of younger children while at play. This is one of the few buildings in the United States to be built of slump block walls, which are left exposed both inside and outside, for strong textural effect.  In order to maintain the effect of one wall of glass in each bedroom, doors to patios are of glazed steel sections similar to the adjacent steel windows.

Stay tuned for more glimpses into our past, present, and future, and follow along on social media with #NCARB100.

Celebrate Our 100th Birthday With a Centennial Giveaway!

How NCARB Facilitated Licensure In the 1940s

Celebrate Our 100th Birthday With a Centennial Giveaway!