According to the upcoming July 2019 issue of NCARB by the Numbers, there are now over 115,000 licensed practitioners across the 55 U.S. jurisdictions. And with 5,000 individuals completing their final core licensure requirement in 2018 and almost 41,000 candidates actively working toward licensure, the architecture pipeline remains strong.

The number of architects licensed in the United States rose by 2 percent in 2018, according to the annual Survey of Architectural Registration Boards. This suggests that new architects continue to move through the pipeline and replace older generations as they retire or step away from the profession.

The survey also revealed that there continue to be more reciprocal (out-of-state) licenses than resident licenses issued in the U.S. There were 125,475 reciprocal licenses reported in 2018, roughly the same as in 2017 and higher than the number of individual architects—indicating the effectiveness of the profession’s existing mobility pathways. 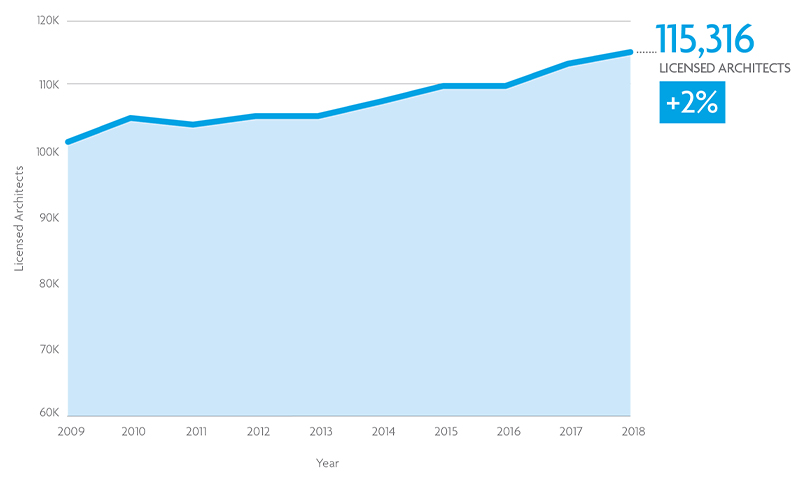 The number of architects has risen over 13 percent in the last decade, while the total U.S. population has only risen 7 percent, according to data from the U.S. Census Bureau. Compared to the population, there is now roughly one architect for every 2,800 people in the United States. The number of candidates completing their final core requirement for licensure dipped to almost 5,000 in 2018. However, this number still remains the second highest on record. The highs seen in 2017 and 2018 were largely driven by two factors: 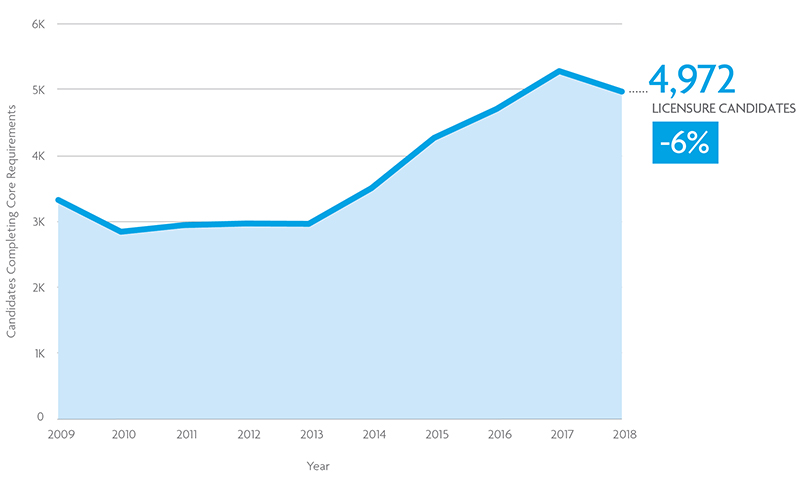 In 2018, nearly 41,000 individuals actively worked toward licensure by reporting AXP hours, taking the ARE, or both. This marks a 1 percent increase from 2017, reflecting a slight decrease in candidates completing core requirements (and subsequently becoming architects), while also indicating the health of the pipeline as the number of new candidates keeps pace with those advancing in their careers.

Just over 5,500 candidates overlapped these programs, taking at least one ARE division and reporting AXP experience. While this is the lowest proportion since 2013, the majority of candidates now overlap examination and experience requirements at some point during their licensure pathway.

Additional data on the path to licensure will be available in July’s 2019 edition of NCARB by the Numbers.

Explore the 2019 NCARB by the Numbers

Explore the 2019 NCARB by the Numbers

NCARB will be performing routine maintenance on My NCARB on Sunday, September 20, at 8 a.m. EST. You can expect My NCARB to be offline for about 12 hours. We apologize for any inconvenience.