Every few years, NCARB conducts a survey of individuals in the architecture profession to determine how the organization is perceived. In 2017, NCARB sent the survey to over 60,000 current and past customers, receiving nearly 6,000 responses from a combination of licensure candidates, NCARB-certified architects, and non-certified architects. 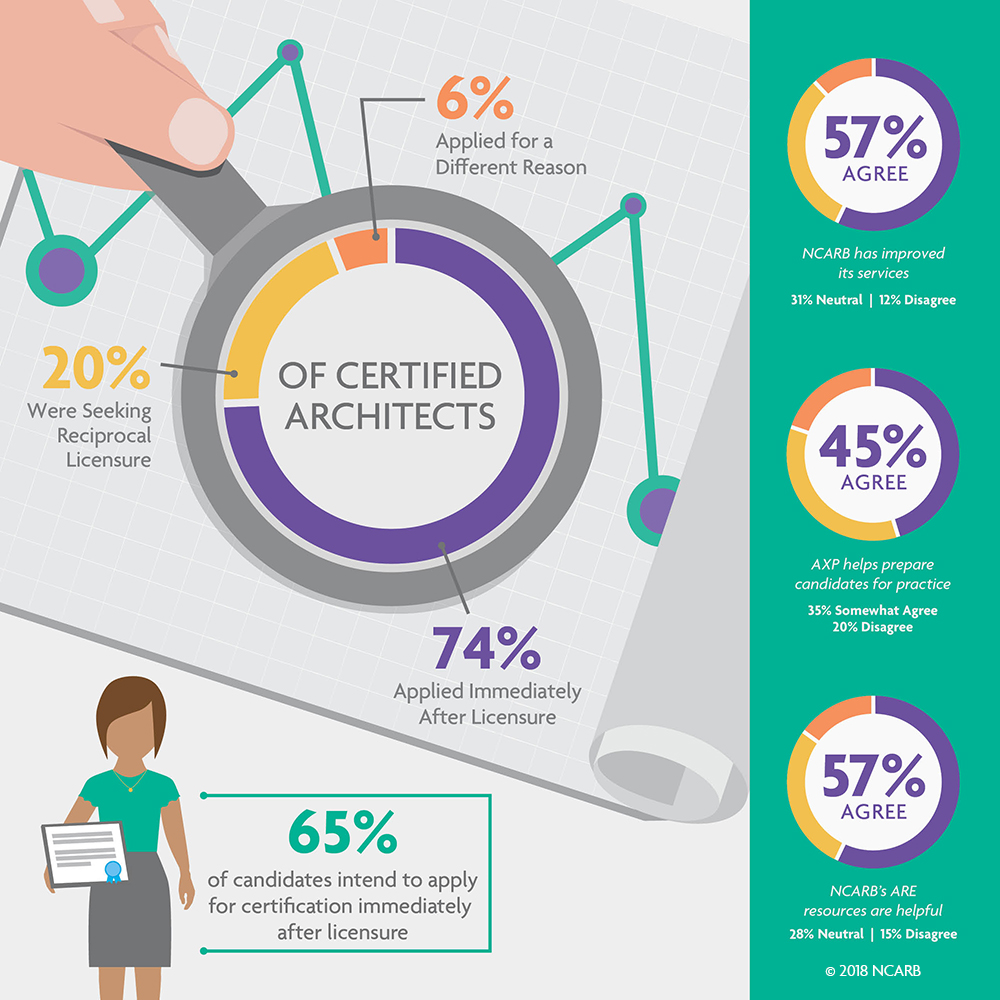 In comparison with responses to the 2011 NCARB Perception Analysis Survey, NCARB’s perception has improved in recent years, with more respondents providing positive feedback on NCARB’s programs, services, and role in the profession.

NCARB Has Improved Its Services

Respondents were slightly less likely to agree that they see their professional interests reflected in NCARB’s work (44 percent).

Certified Architects Have Most Positive Perception

Of all respondents to the survey, architects who hold an active NCARB Certificate were the most likely to agree that NCARB has a positive reputation and is an effective advocate in the profession (63 and 60 percent, respectively).

Licensed architects without an active NCARB Certificate are, on average, 18 percentage points less likely to agree with each statement than Certificate holders.

Forty-five percent of individuals who have completed the AXP consider the program to be helpful or very helpful in preparing them for architectural practice. This is 13 percentage points higher than the response in 2011 from individuals who completed the previous iteration of the experience program (the Intern Development Program, or IDP).

Individuals currently on the path to licensure were most likely to select “somewhat helpful” when asked about the AXP’s role in preparing them for practice.

Note: Responses indicating “not applicable” have not been included in this chart.

The ARE is Perceived Positively

Over half (55 percent) of individuals who have completed the ARE agree or strongly agree that the exam is appropriately rigorous and accurately assesses candidates’ knowledge and skills, and 57 percent indicated that NCARB’s study resources were helpful in preparing for the ARE.

Note: Responses indicating “not applicable” have not been included in this chart.

Facilitating reciprocal licensure is regarded as NCARB’s most important function, with 79 percent of respondents rating it as “very important.”

The importance of collaborating with state boards to educate the public on the role licensed architects play in protecting their health, safety, and welfare has increased over time: 74 percent of respondents rated this as “very important” in 2017, compared to 66 percent in 2011.

Note: Data collected from the 2011 and 2017 NCARB Perception Analysis surveys.

In 2017, 74 percent of certified architects indicated that they applied for an NCARB Certificate immediately after acquiring their initial license—a 12 percent increase from 2011. This corresponds with an 11 percent drop in architects applying for certification solely to facilitate a reciprocal licensure request.

Note: Data collected from the 2011 and 2017 NCARB Perception Analysis surveys.