Both gender equity and racial and ethnic diversity improved in 2018, primarily along early career stages. For the first time, women accounted for 50 percent of new AXP candidates—the first year on record that any cohort has seen equal representation of men and women. Plus, women made up 37 percent of candidates completing the core requirements for licensure in 2018, and 35 percent of new NCARB Certificate holders. 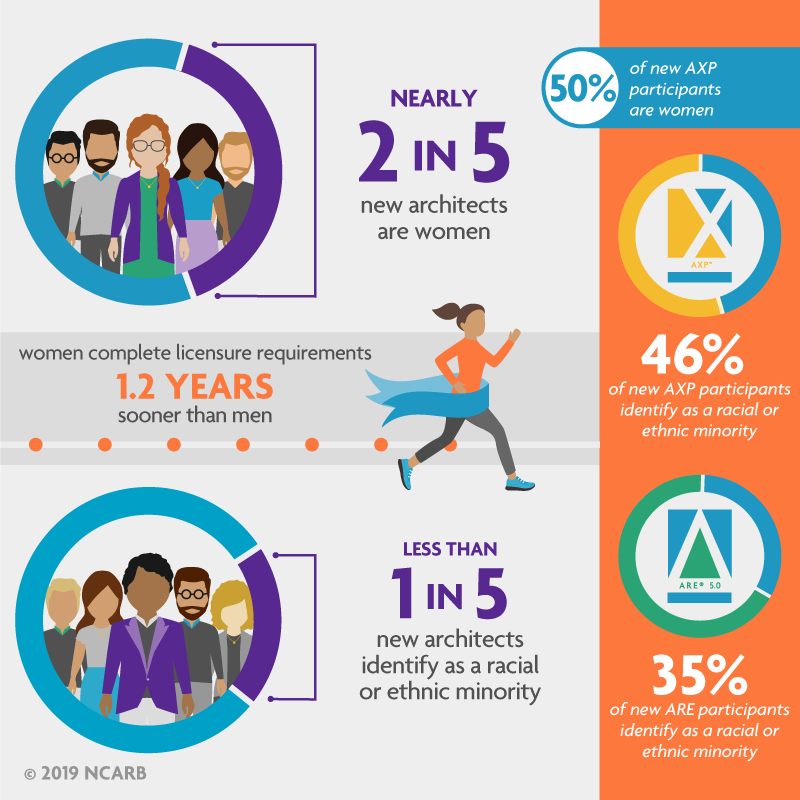 Although women and people of color remain underrepresented within the profession, diversity among licensure candidates continues to improve, indicating that with time, the community of practicing architects will reflect this change as well.

Gender equity increased at nearly every career stage in 2018, indicating that although women remain underrepresented in the profession, the gap continues to close.

The largest improvement was seen in the group of candidates beginning the AXP in 2018, which increased 4 percentage points compared to 2017. The proportion of men to women in this group is now equal—the first cohort on record to reach even representation. Women also represent 37 percent of candidates completing core licensure requirements, 35 percent of new NCARB Certificate holders, and 21 percent of all NCARB Certificate holders, compared to 35, 32, and 20 percent, respectively, in 2017.

The proportion of women completing the AXP in 2018 was the only career stage to show no improvement in gender equity this year. Women continue to make up 40 percent of this group—the same representation seen in 2016 and 2017. However, a strong increase in the number of women starting the experience program in 2018 and improvements along every other career stage suggest gender equity for candidates completing the AXP should continue to improve in future years.

Note: Historical data can shift because licensure candidates can backdate experience up to five years. NCARB recognizes that not all individuals identify as male or female. However, NCARB’s data currently uses the same sex categorization as the U.S. Census Bureau.

Women represented 39 percent of candidates completing the ARE in 2018—the highest proportion on record and an increase of 2 percentage points. Gender equity in candidates finishing the exam has been steadily improving over the past decade. In 2009, women made up just 29 percent of this group.

Because completing the ARE is the final step on the path to licensure for many candidates, NCARB expects to see continued improvement in the cohort of individuals completing all core requirements and becoming new NCARB Certificate holders in coming years.

Women have consistently completed their education, experience, and examination requirements sooner than their male peers. In 2018, women finished the core licensure requirements in an average of 12 years, compared to 13.2 years for men and 12.8 years for all candidates.

Racial and ethnic diversity continued to improve along all early career stages in 2018. Forty-six percent of new AXP participants, 35 percent of new exam candidates, and 21 percent of candidates completing the ARE identified as non-white or Hispanic, increases of 1, 2, and 3 percentage points for each group, respectively. Individuals completing the AXP saw an even larger improvement: 34 percent identified as non-white or Hispanic, a 4 percent increase from 2017 and the second significant yearly increase in a row.

While diversity statistics for individuals completing all licensure requirements and holding an NCARB Certificate did not change from 2017, the consistent growth in early career stages suggest improvements are slowly working down the licensure pipeline. For comparison, 39 percent of the U.S. population identifies as either non-white or Hispanic, according to 2017 statistics from the U.S. Census Bureau.

ARE Completions by Race/Ethnicity

The proportion of individuals completing the ARE in 2018 who identify as non-white or Hispanic was 21 percent, an increase of 3 percentage points compared to 2017. Although racial and ethnic diversity have been slower to improve in this cohort than in AXP completions, the disparity between white and non-white or Hispanic candidates has been gradually decreasing over the past decade.

Record Holders Around the World

Licensure candidates and NCARB Certificate holders are located in countries across the globe. Outside of the United States, the largest population of Record holders are based in Canada (727), the United Kingdom (114), the Republic of Korea (110), and China (88).