The most common—and the most widely accepted—path to becoming licensed in the United States includes earning a degree from an architecture program accredited by the National Architectural Accrediting Board (NAAB). On average, licensure candidates with a degree from a NAAB-accredited program have greater success when taking the ARE. NAAB data also reveals that both new and total enrollment in accredited programs is increasing, despite a slight drop in the number of graduates. 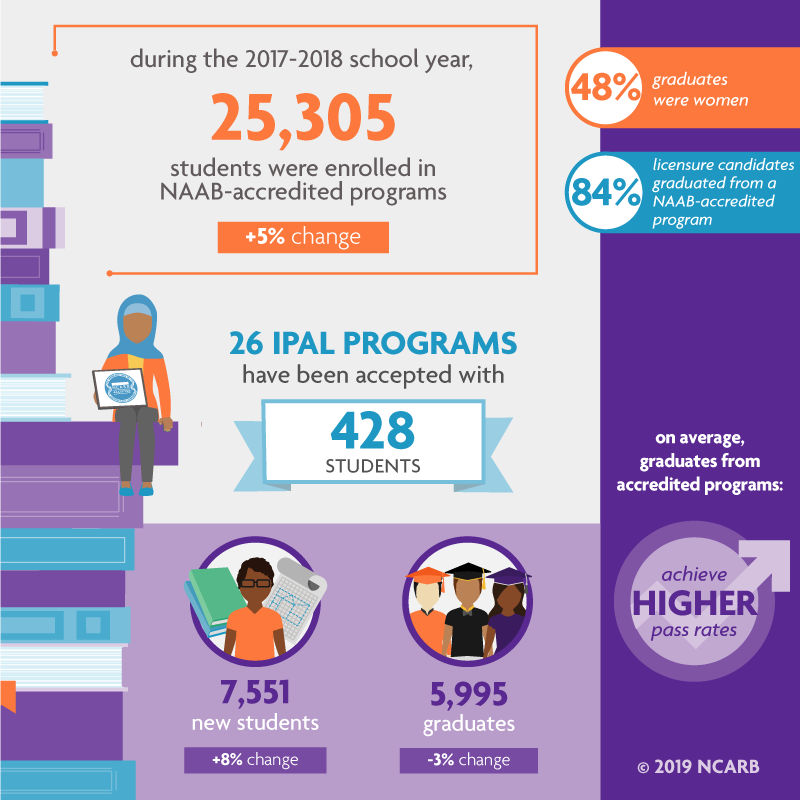 In 2018, for the first time, over half of newly licensed architects started their NCARB Record while in school, indicating that the majority of students are now overlapping experience with education. This proportion is expected to increase in future years as more students enroll in Integrated Path to Architectural Licensure (IPAL) options; it also suggests NCARB’s efforts to raise early awareness of the licensure process are helping students make informed decisions. Plus, 2018 saw the first graduates of NCARB’s IPAL initiative, which allows students to complete their experience and examination requirements while earning a degree.

IPAL Students Across the U.S.

Since the program’s launch in 2015, NCARB has accepted 26 NAAB-accredited programs at 21 colleges into its IPAL initiative. 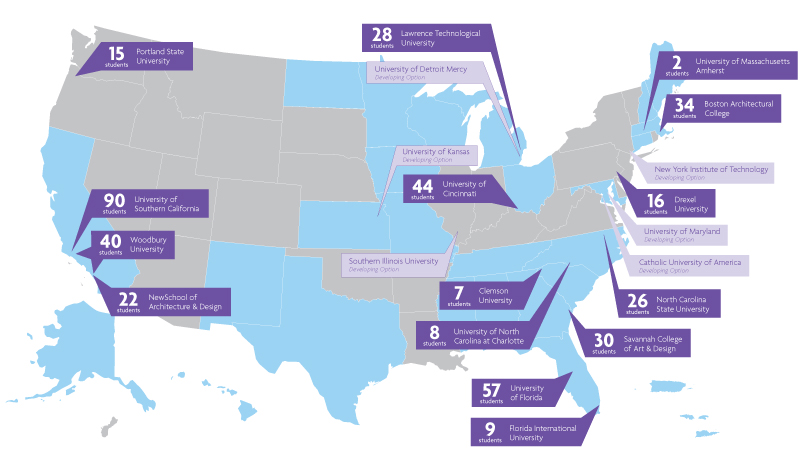 The IPAL option—typically offered as an additional path within an existing program—seeks to shorten the time it takes to become an architect for students dedicated to earning a license. Participating programs provide students with the opportunity to complete the AXP and take all six ARE 5.0 divisions prior to graduation. The first students graduated from the initiative at the close of the 2017-2018 school year, earning their licenses shortly after graduation.

Currently, 30 boards will accept licensure applications from candidates who have completed the ARE prior to graduation through an IPAL program.

Note: Enrollment data is from the 2017-2018 school year. Schools with 0 students enrolled may still be developing their IPAL options.

The total population of new enrollees is split evenly between men and women, a sign that gender parity may be seen in later career stages in coming years.

Note: This data is provided to the NAAB by accredited programs and was published in the 2018 NAAB Annual Report on Architecture Education​. Students enrolled in non-accredited architecture programs are not represented.

Note: This data is provided to the NAAB by accredited programs and was published in the 2018 NAAB Annual Report on Architecture Education​. Students enrolled in non-accredited architecture programs are not represented.

Number of Graduates Dips Below 6,000

In 2018, 5,995 degrees were awarded by 156 NAAB-accredited programs, a 3 percent decrease in graduates from 2017. This is the second time in the last 10 years that the number of total graduates has dipped below 6,000. This drop could correspond to the gradual decline in total enrollment seen between 2011 and 2017. For comparison, the average number of graduates seen across the decade is 6,140.

Of these graduates, 52 percent were men and 48 percent were women—a 3 percentage point improvement in gender equity from the 2016-2017 school year.

Note: This data is provided to NAAB by accredited programs and was published in the 2018 NAAB Annual Report on Architecture Education. Students enrolled in non-accredited architecture programs are not represented.

Of all architects who earned their initial license in 2018, 52 percent started their NCARB Record while in school—a six percentage point increase compared to 2017, and the first time this group has been in the majority.

Creating an NCARB Record is considered one of the first steps on the path to licensure because it enables students to begin reporting experience. Growth in the proportion of architects who started their Record in school indicates a better informed student population, and an increased overlap between education, experience, and examination—potentially shortening the time to licensure in future years.

Of all licensure candidates who completed the AXP in 2018, 84 percent held a degree from a NAAB-accredited program, the same proportion seen in 2017. This percentage has varied only slightly from year to year (the 10-year average is 83 percent), confirming that earning a degree from a NAAB-accredited program remains the preferred option for completing the education requirement for licensure.

Note: Historical data can shift because licensure candidates can backdate AXP experience up to five years.

The slight year-on-year increase in testing time for graduates from accredited programs is likely due to the retirement of ARE 4.0: as pass rates dipped (see Exam Transition Sees Success Rates Drop), the need for additional retakes increased, which extended the time needed to complete the exam.

Graduates From Accredited Programs Have Higher Pass Rates Across All Divisions