The number of U.S. architects continued to rise in 2018, suggesting that the profession is healthy and growing. There are now over 115,000 licensed practitioners across the 55 jurisdictions, a 2 percent increase from 2017. With 5,000 individuals completing their final core licensure requirement in 2018 and almost 41,000 candidates actively working toward licensure, the architecture pipeline remains strong. 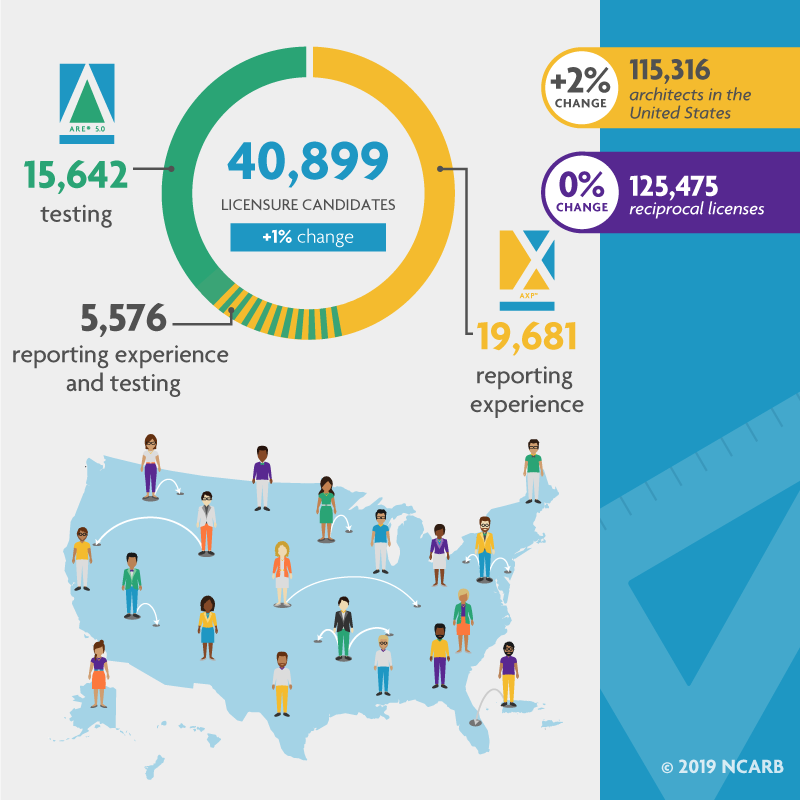 The over 125,000 reciprocal (out-of-state) licenses held by U.S. architects in 2018 indicate the effectiveness of the mobility pathway established by NCARB and the architectural licensing boards. This number is largely unchanged from 2017, and there are still more reciprocal licenses than residential licenses issued across the jurisdictions.

In early 2019, NCARB partnered with Benenson Strategy Group to conduct a survey exploring the public perception of licensure and regulation. Nearly 1,000 responses were received from registered voters. 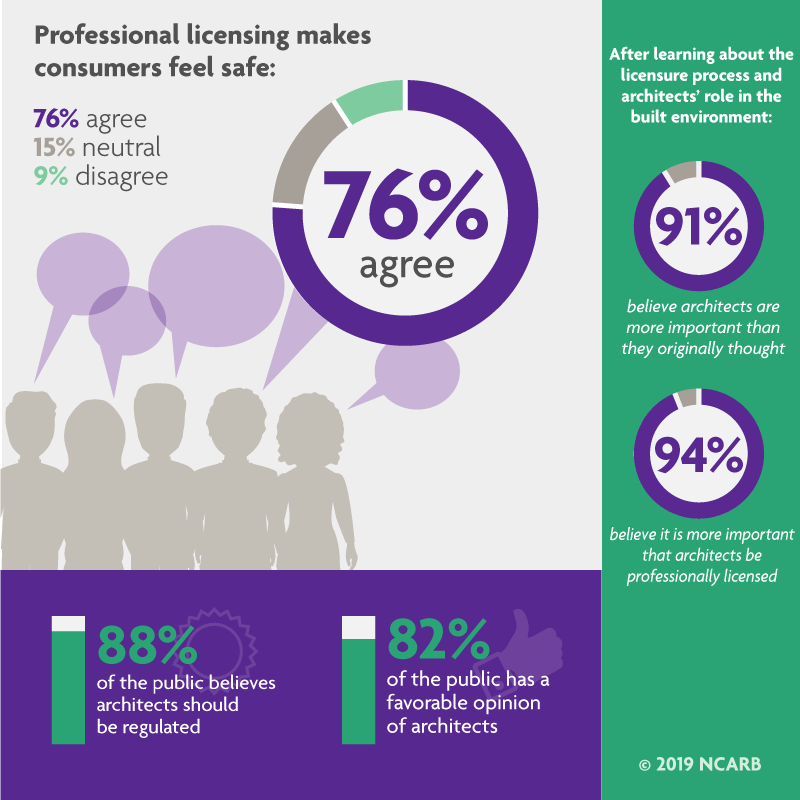 The majority of respondents feel that professional licensure for architects is an important factor in protecting the public health, safety, and welfare. After learning more about the licensure process, most voters feel that the education, experience, and examination required elevates the role of the architect even further in their perception.

Nearly 5,000 candidates completed their final core requirement for licensure in 2018—a 6 percent decrease following the peak in 2017, but still the second highest number on record. The highs seen in 2017 and 2018 were largely driven by the 2016 overhaul of the AXP, which pushed a large number of candidates closer to completion of the experience program, and the 2018 retirement of ARE 4.0, which saw many candidates hurrying to complete the examination.

In the coming years, these numbers may return to historic levels as NCARB’s experience and examination programs establish new normals.

In 2018, nearly 41,000 individuals actively worked toward licensure by reporting AXP hours, taking the ARE, or both. This 1 percent increase compared to 2017 reflects the slight decrease in candidates completing core requirements (and subsequently becoming architects), while also indicating the health of the pipeline as the number of new candidates keeps pace with those advancing in their careers.

Of this pool of candidates, just over 5,500 overlapped (taking at least one ARE division and reporting AXP experience). While this is the lowest proportion since 2013, the majority of candidates now overlap these core requirements at some point during their licensure pathway (see Most Candidates Overlap the ARE and AXP).

The number of architects licensed in the United States rose to 115,316 in 2018, according to the annual Survey of Architectural Registration Boards. This is a 2 percent increase from 2017 and represents a 13 percent increase compared to the number of U.S. architects seen a decade ago—suggesting that new architects continue to move through the pipeline and replace older generations as they retire or step away from the profession.

The 2018 Survey of Architectural Registration Boards also revealed that there continue to be more reciprocal (out-of-state) licenses than resident licenses issued in the U.S. There were 125,475 reciprocal licenses reported in 2018, roughly the same as in 2017 and higher than the number of individual architects.

While the number of architects licensed in the United States has risen over 13 percent in the last decade, the total U.S. population has risen just 7 percent, according to data from the U.S. Census Bureau. This suggests that there are now slightly more architects per capita (roughly 1 architect to every 2,800 people) than there were in 2009 (roughly 1 architect to every 3,000 people). Many architects maintain their professional licenses into retirement, which could also impact this data.