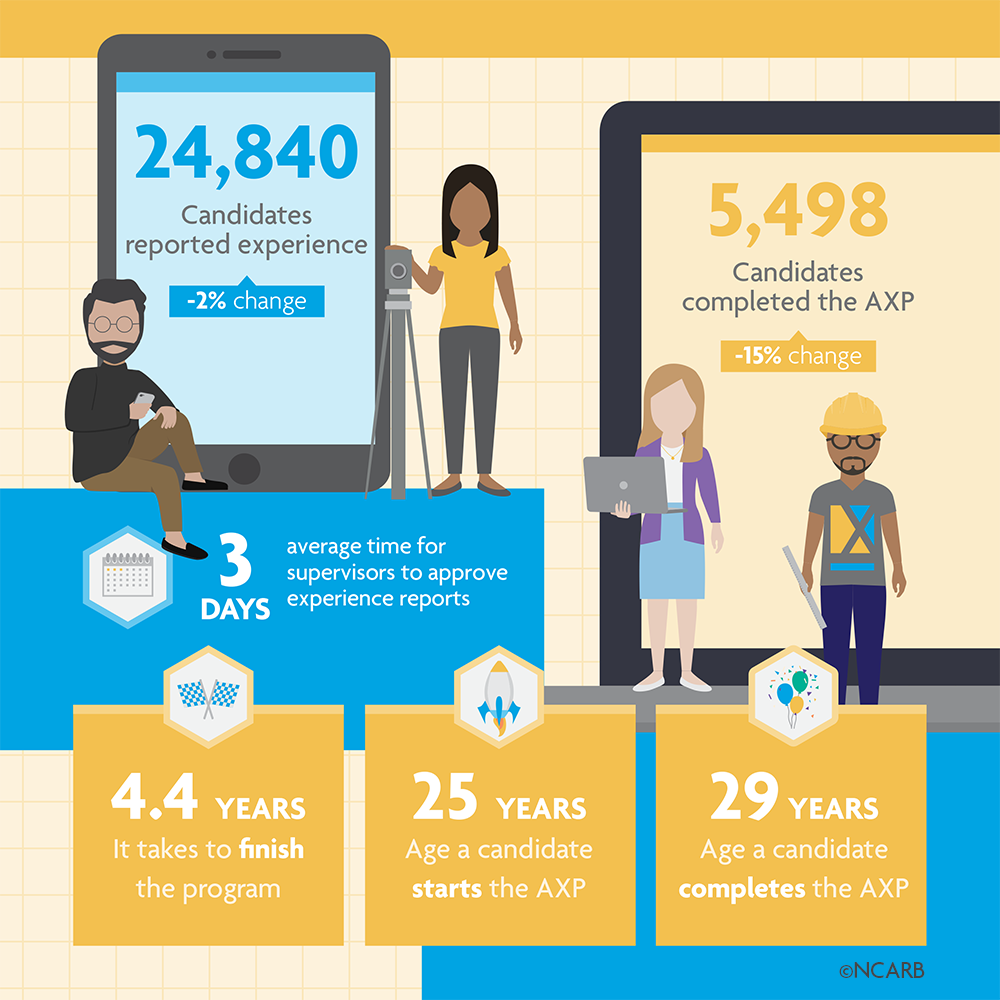 The number of candidates who completed the AXP fell for the third successive year in 2019, an anticipated adjustment following the peak in 2016. Although 15 percent fewer candidates completed the experience program in 2019 compared to 2018, 2019’s program completions remain above the decade’s average of 5,308.

Candidates continue to earn and record experience earlier, often while in college—a trend NCARB expects to increase in the coming years. On average, candidates who finished the AXP in 2019 took one month longer than those who finished the program in 2018. The slight increase may indicate that time spent completing the experience component of licensure is stabilizing after the initial impact of program updates implemented in 2014-2016.

In 2019, nearly 5,500 candidates completed NCARB’s experience program, which is required for architectural licensure in most U.S. jurisdictions. This is 15 percent fewer than the number of candidates who completed the AXP in 2018.

The decreasing trend seen over the last three years reflects a return toward normal, after a large number of candidates completed the program in 2016-2017 (leaving fewer candidates in the pool to complete the program in the following years). For reference, the number of AXP completions seen in 2019 is slightly above the decade’s average of 5,308.

The number of AXP completions has shifted from year to year over the past decade as program updates and restructures influence candidates’ progress—for instance, nearly 2,400 candidates automatically completed the program when experience areas were realigned in 2016. Additional program updates include removing elective hours (July 2015) and enabling candidates to earn 50 percent credit for experience more than eight months old (July 2014).

The average licensure candidate who completed the AXP in 2019 took 4.4 years, an increase of 3 percent—about one month—compared to 2018. The slight increase seen in 2018 and 2019 suggests that the time spent completing the experience requirement is stabilizing after the initial impact of several program updates.

The time it takes to complete the experience program has remained between 4.1 and 4.4 years since the removal of the program’s elective hours in 2015, which reduced the number of required hours by about a third. Two additional program updates contributed to the overall drop in time to complete the program seen since 2014: allowing candidates to report experience older than six months (2014) and realigning experience areas (2016).

While neither age has shifted dramatically in the past several years, NCARB’s ongoing outreach program to architecture students and the Integrated Path to Architectural Licensure (which allows students to complete the AXP and take the national licensing exam while in school) may encourage candidates to begin earning experience sooner.

Eighteen percent of licensure candidates who completed the path to licensure in 2019 finished the Architect Registration Examination® (ARE®) before they completed their experience—a 1 percentage point increase compared to 2018.

The overall decrease following 2016’s peak at 29 percent (following a steady increase over the previous five years) is likely linked to the alignment of the AXP and ARE. Candidates may now be more likely to choose to complete experience areas before sitting for their corresponding exam divisions.

The majority of experience reports submitted in 2019 (57 percent) were reviewed and approved by a supervisor within three days of the report’s submission. However, the much lengthier times taken in some circumstances drove the mean time for supervisors to review and approve a report in 2019 up to 32 days.

Prior to 2009, all experience was reported via mailed forms. The final day to report experience outside of NCARB’s newly instated six-month reporting requirement was June 30, 2010, which likely caused the spike seen that year.

Note: In the 2019 NCARB by the Numbers, NCARB reported this data based on year of report submission date. In this year’s edition, the chart reflects year of report approval date, a change which allows NCARB to more accurately understand supervisor behavior and causes fewer shifts in historical data.

Of active AXP supervisors in 2019, 19 percent were women, the same proportion seen in 2018. This is 3 percentage points lower than the proportion of NCARB Certificate holders (an approximate representation of licensed architects) who are women, which is 22 percent.

The proportion of AXP supervisors who identified as either non-white or Hispanic  did not change, remaining at 12 percent. This is 1 percentage point higher than the proportion of NCARB Certificate holders who are non-white or Hispanic. These data points highlight the ongoing challenge of providing a diverse set of supervisors and mentors to act as leaders and role models in the architecture profession.