The number of U.S. architects continued to rise in 2019, suggesting that the profession heading into 2020 was healthy and growing. At the start of 2020, there were over 116,000 licensed practitioners across the 55 jurisdictions, a 1 percent increase from 2018. Architects also collectively hold over 137,000 out-of-state (reciprocal) licenses. This is evidence that the profession has an effective path to mobility. 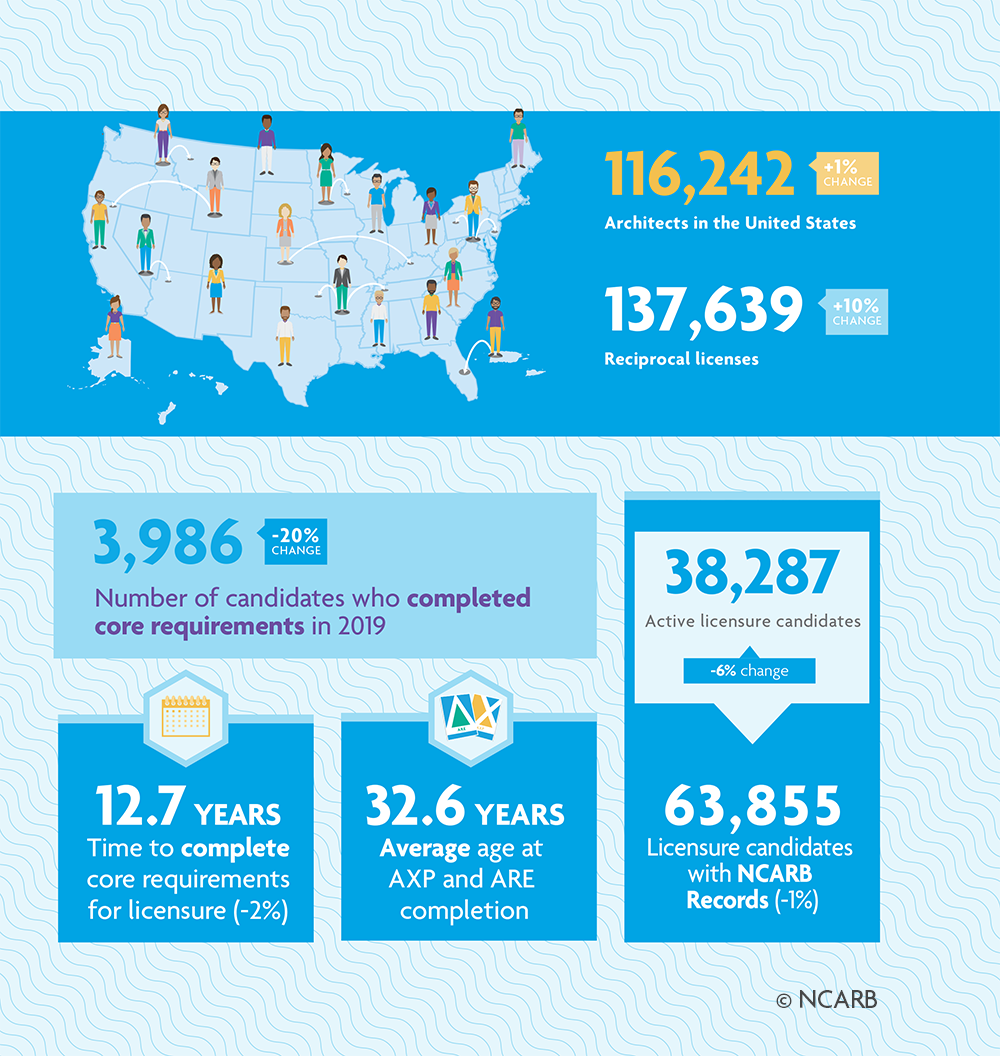 Nearly 4,000 individuals completed their final core licensure requirement in 2019, taking an average of 12.7 years to do so. This is a 20 percent drop in the number of candidates who reached this milestone compared to 2018. 2019’s decrease in candidates is significant but expected following several years of high completion volumes. In addition, the 6 percent drop in the number of individuals actively working toward licensure during the year indicates that candidates may be under less pressure to finish quickly following ARE 4.0’s retirement in June 2018.

Although 2019 saw an increase in time to complete both the individual experience and examination programs—an impact often seen after programmatic changes—the total time to finish earning an architecture degree, gaining experience, and taking the examination fell by about four months compared to 2018.

The number of architects licensed in the United States rose to 116,242 in 2019, according to the annual Survey of Architectural Registration Boards. This is a 1 percent increase from 2018 and represents a 10 percent increase compared to the number of U.S. architects seen a decade ago. This suggests that the pipeline of new architects continues to offset the number of retiring architects. The steady growth seen in recent years addresses a previous concern that the number of practitioners would dwindle as baby boomers (who made up a large proportion of the architect population) began to step away from the profession. However, many architects maintain their professional licenses into retirement, which could also impact this data.

Mobility in Architecture on the Rise

The 2019 Survey of Architectural Registration Boards also revealed that there continue to be more reciprocal (out-of-state) licenses than resident licenses issued in the United States. Regulators and legislators frequently use data related to reciprocal licenses as an indicator of mobility in licensed professions.

There were 137,639 reciprocal licenses reported in 2019, approximately 10 percent more than in 2018 and over 20,000 higher than the number of individual architects. This marks the largest increase seen in recent years and could be a result of many factors, including market needs and efforts to publicize pathways to reciprocity for architects. The total number of reciprocal licenses suggests that the average architect is licensed in at least two U.S. jurisdictions, and that the current path to mobility in the profession is effective.

While the number of architects licensed in the United States has risen over 10 percent in the last decade, the total U.S. population has risen just 6 percent, according to data from the U.S. Census Bureau. There are now slightly more architects per capita (roughly 1 architect to every 2,800 people) than there were in 2010 (roughly 1 architect to every 2,900 people). Many architects maintain their professional licenses into retirement, which could also impact this data.

In 2019, nearly 4,000 candidates finished their final core requirement for licensure—a step that indicates an individual has completed the national experience and examination programs. This is a reliable indicator that an individual has become (or soon will become) licensed in a U.S. jurisdiction.

The number of candidates completing their final core requirement fell by 20 percent compared to 2018. This decline was expected following the record high seen in 2017, which was a result of recent experience and examination program changes. For reference, the number of candidates who completed their final core requirement in 2019 is just above the decade’s average of 3,852.

As candidates become familiar with the new experience and examination requirements, the number of candidates completing core requirements is expected to stabilize at a new “normal” level.

Note: The core requirements for licensure in the United States include gaining an education (typically a degree from a NAAB-accredited program), completing the AXP, and passing the ARE. Some jurisdictions have additional requirements that fall outside this “core,” such as a supplemental exam.

The 3,986 candidates who completed their final core requirement for licensure in 2019 equated to approximately 10 percent of all individuals actively working toward earning a license in 2019. This is a 2 percentage point decrease compared to 2018, but still well above the percentages seen from 2010-2015.

In 2019, just over 38,000 individuals actively worked toward licensure by reporting experience, taking the examination, or both. This is a 6 percent decrease in the number of candidates making AXP and/or ARE progress compared to 2018.

The increase in candidates with active Records who are not making experience or examination progress indicates that candidates may be under less pressure to finish the licensure process quickly following the June 2018 retirement of ARE 4.0, but still intend to earn a license.

Of the pool of candidates making progress in 2019, just over 5,100 overlapped programs by taking at least one ARE division while reporting AXP experience. This marks the third year in a row the number of candidates overlapping has shrunk; however, the majority of candidates still overlap these core requirements at some point during their licensure pathway (see Most Candidates Overlap the ARE and AXP).

Majority of Candidates Not Actively Working Toward Licensure Are AXP Complete

Of candidates who maintained an active Record but didn’t work toward licensure, over half (54 percent) have completed the AXP—28 percent of these individuals have started the ARE, but 26 percent have not. This suggests that over a quarter of licensure candidates choose to take a break between completing their experience requirement and starting the exam.

On average, 6.8 of those years were spent completing NCARB’s experience and examination programs, an increase of 3 percent (about two months) compared to 2018. This corresponds with slight increases in the average time to complete each program, likely driven by the launch of the AXP and the transition to ARE 5.0.