Washington, DC—Licensure candidates and new architects are more diverse than ever before, according to new data from the 2017 edition of NCARB by the Numbers. Released annually by the National Council of Architectural Registration Boards (NCARB), the publication provides exclusive insight into the number of U.S. architects, the pool of candidates working toward licensure, and diversity in the profession.

For the first time since NCARB began collecting demographics data, gender equity improved along every career stage—including gaining professional knowledge through the Architectural Experience Program™ (AXP™), starting the Architect Registration Examination® (ARE®), and earning a license. 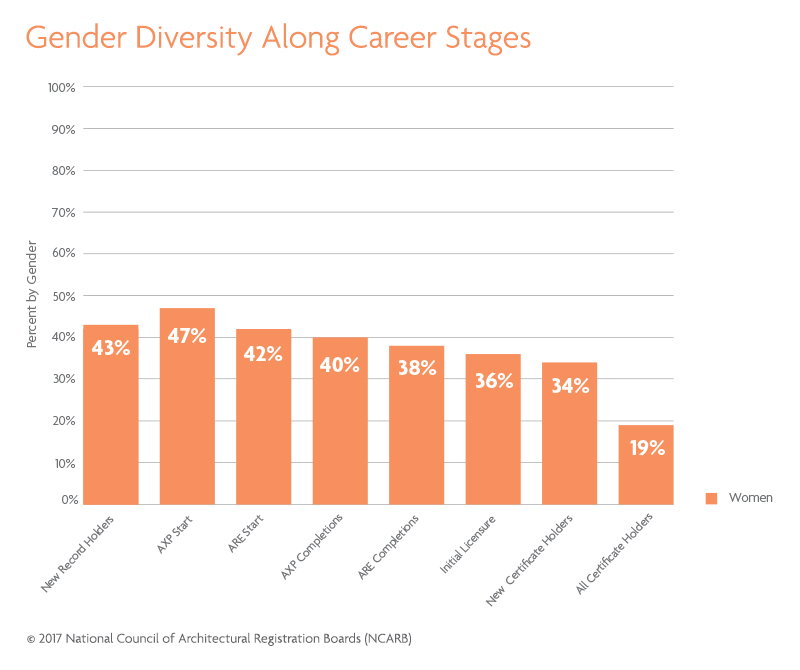 In 2016, women accounted for 47 percent of new AXP participants and 42 percent of new ARE candidates. While women remain underrepresented among practitioners and NCARB Certificate holders, they now account for 36 percent of newly licensed architects, compared to 34 percent in the previous year. According to 2015 estimates from the U.S. Census Bureau, women make up 51 percent of the U.S. population.

Racial and ethnic diversity is also increasing among licensure candidates, although at a slower pace.

In 2016, 42 percent of new AXP participants and 30 percent of new ARE candidates identified as non-white—up three percentage points for both groups. However, diversity among newly licensed architects and NCARB Certificate holders remained the same. For comparison, 38 percent of the U.S. population identifies as either non-white or Hispanic, according to 2015 estimates from the U.S. Census Bureau.

“While several groups remain underrepresented within the profession, these trends point to growing diversity among licensure candidates, and eventually, future architects,” said NCARB President Kristine A. Harding, NCARB, AIA. “In response, NCARB will continue to ensure our programs balance inclusivity with the rigor needed to protect the public.”

The full 2017 edition of NCARB by the Numbers will be available in July. To learn more about NCARB’s data, visit www.ncarb.org.