In early 2020, NCARB and NOMA conducted a survey exploring impediments throughout early architecture career phases, especially the process of earning a license. Through the findings—which are being released in several independent reports—NCARB and NOMA hope to identify areas where underrepresented groups are disproportionately impacted, outline next steps for further study, and propose potential solutions.

The Baseline on Belonging: Examination Report offers insights related to the Architect Registration Examination® (ARE®)—specifically regarding how factors like exam cost, firm support, and exam preparation may create unintended impediments on the path to licensure.

Key Findings
Viewed as a whole, responses reveal significant impediments to affording the exam across demographics. However, certain demographic groups—including people of color, women of color, and older respondents—were even more likely to report barriers in exam affordability. In addition, one-third of candidates who completed the ARE reported receiving no firm support toward the cost of the exam—indicating that candidates may receive less ARE support from their firms than anecdotal claims would suggest. 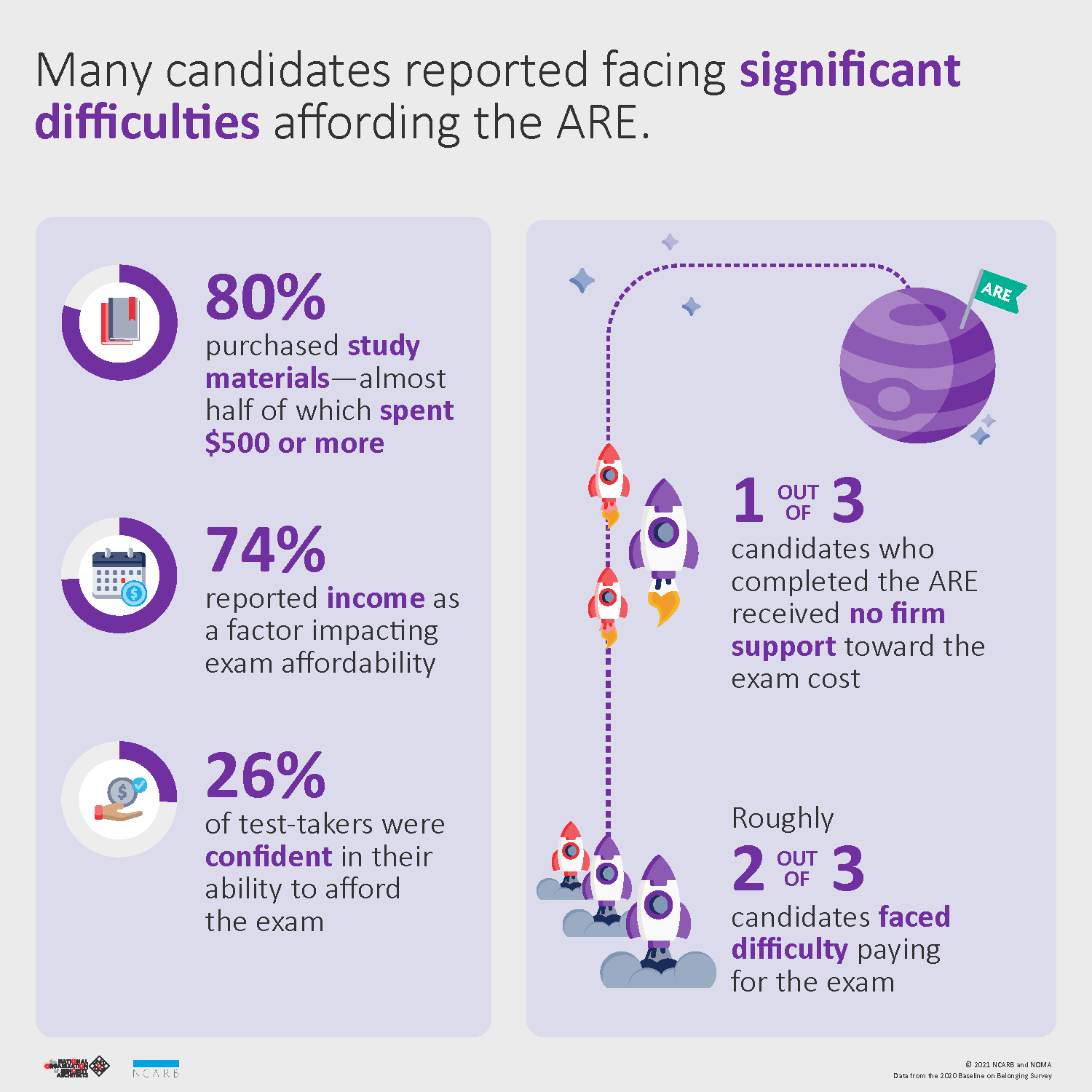 Of the more than 5,300 individuals who took the survey, the majority of respondents had either passed the ARE, taken at least one division, or were preparing to take a division of the exam. Roughly two-thirds of these respondents reported facing difficulty paying for the exam, and nearly three-fourths reported that income impacts their ability to afford the ARE. 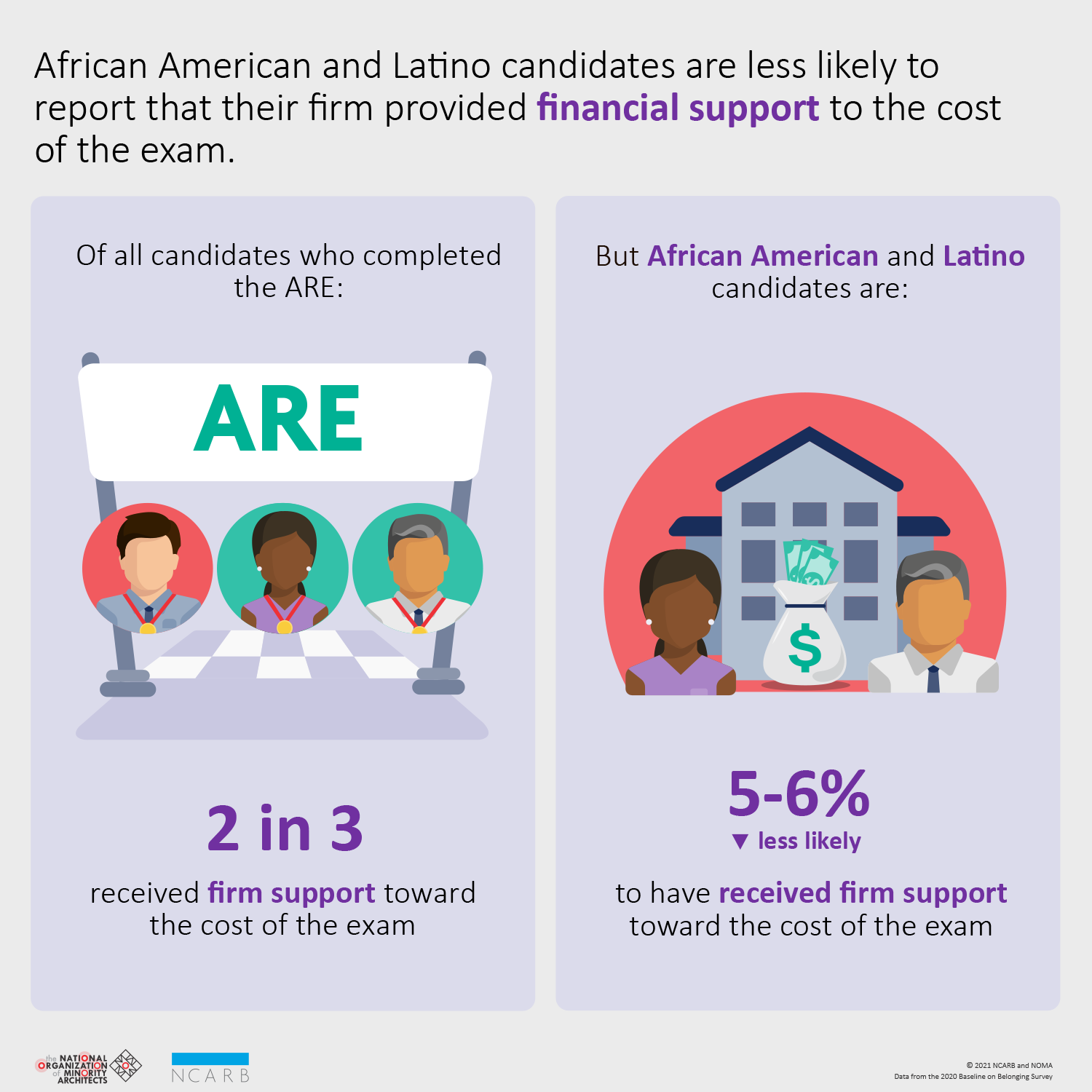 When filtered by race/ethnicity, the data shows that emerging professionals experience slight differences receiving firm support for the ARE based on their demographic—with African American and Latino candidates the most consistently impacted. 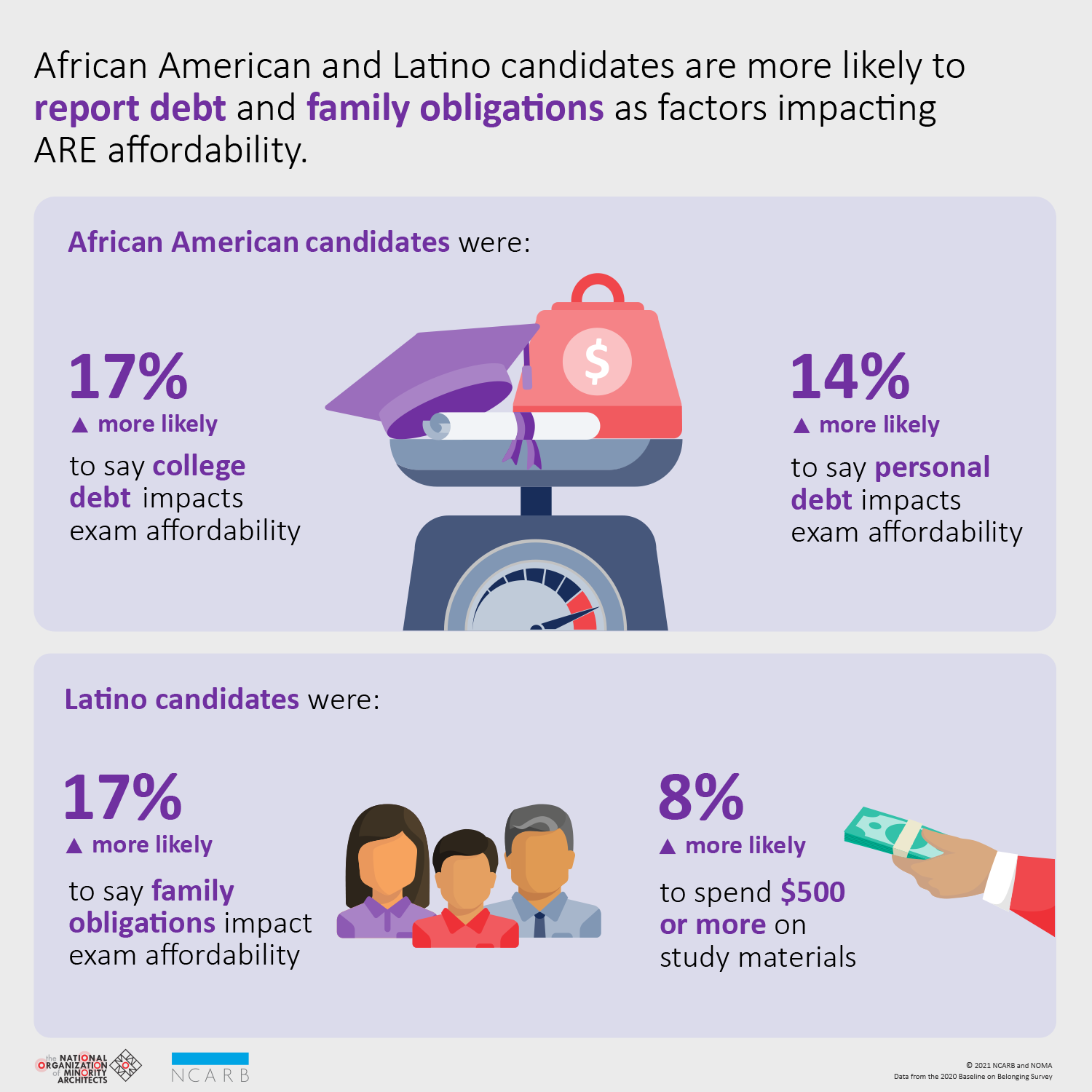 Additionally, when asked what factors impacted their ability to afford the exam, African American and Latino candidates were more likely than their peers to report being impacted by debt and family obligations. 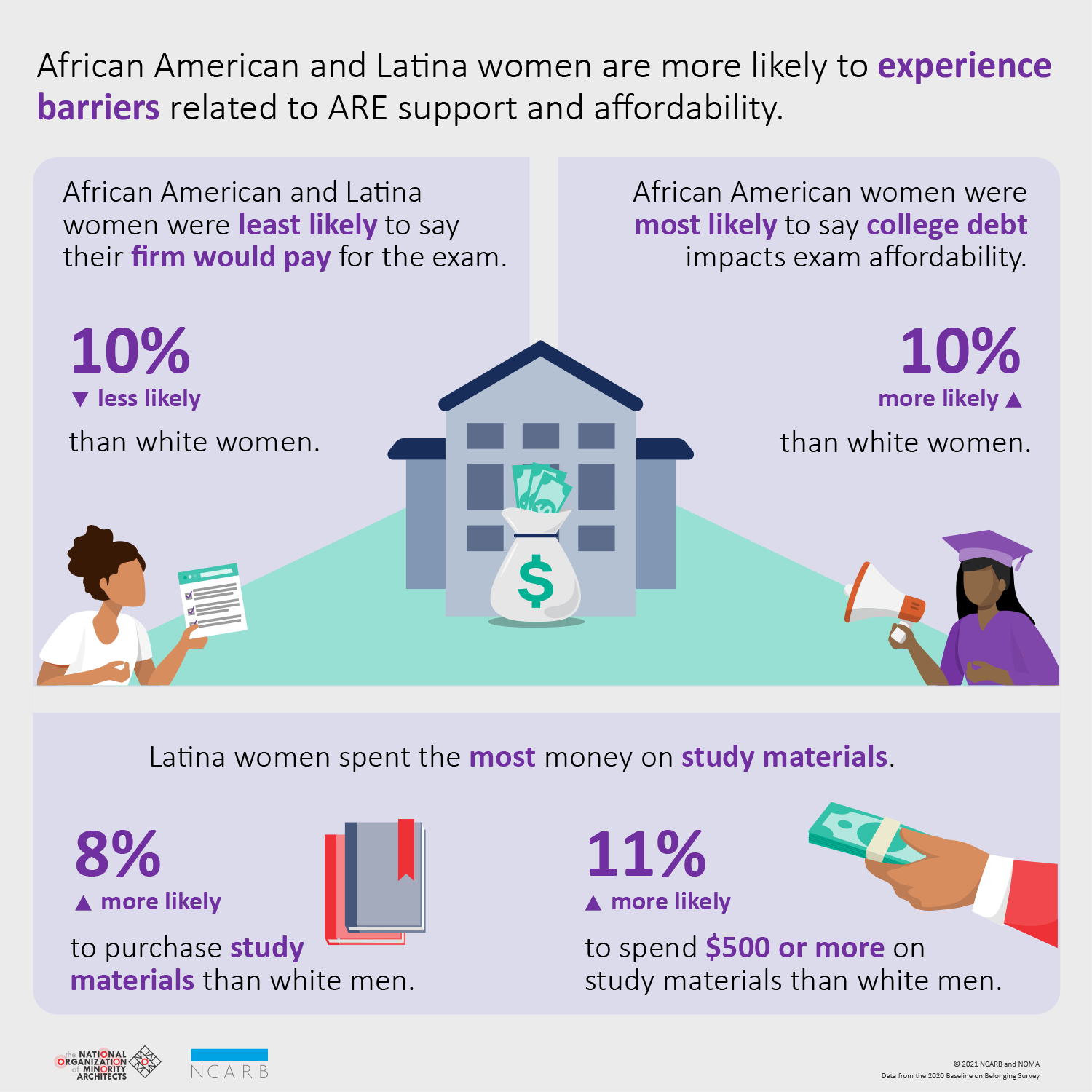 The disparities grow when gender is factored in along with race and ethnicity—with women of color less likely to receive firm support for the ARE and more likely to experience personal barriers to exam affordability than their white counterparts. 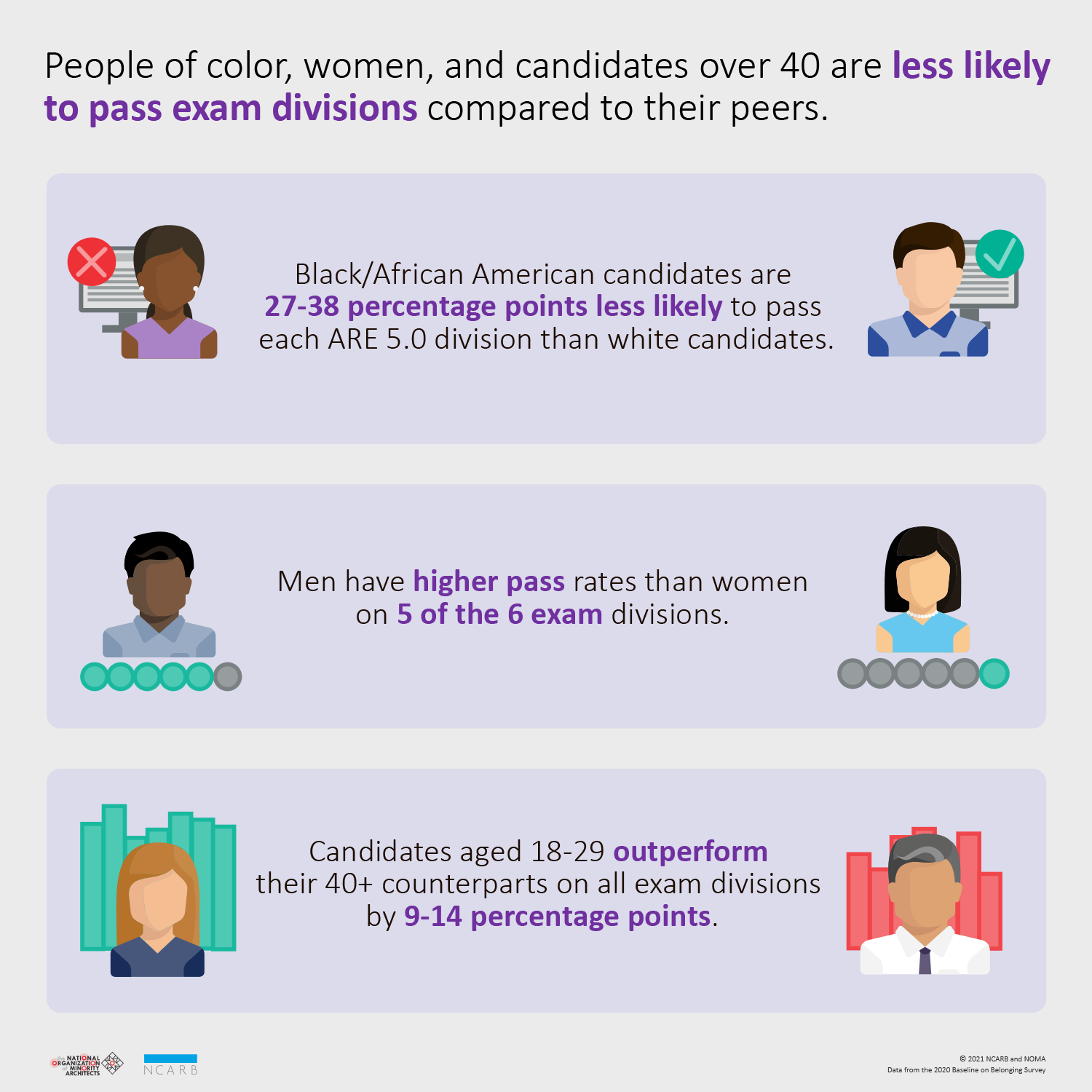 Where appropriate, NCARB supplemented the Baseline on Belonging data with information from NCARB Record holders to offer a more complete picture of candidates’ experience with the exam. Both NCARB’s Record holder data and survey findings reveal that candidates of color, women, and candidates over 40 are less likely to pass the exam. Learn more about exam performance disparities and the steps NCARB is taking to resolve them. 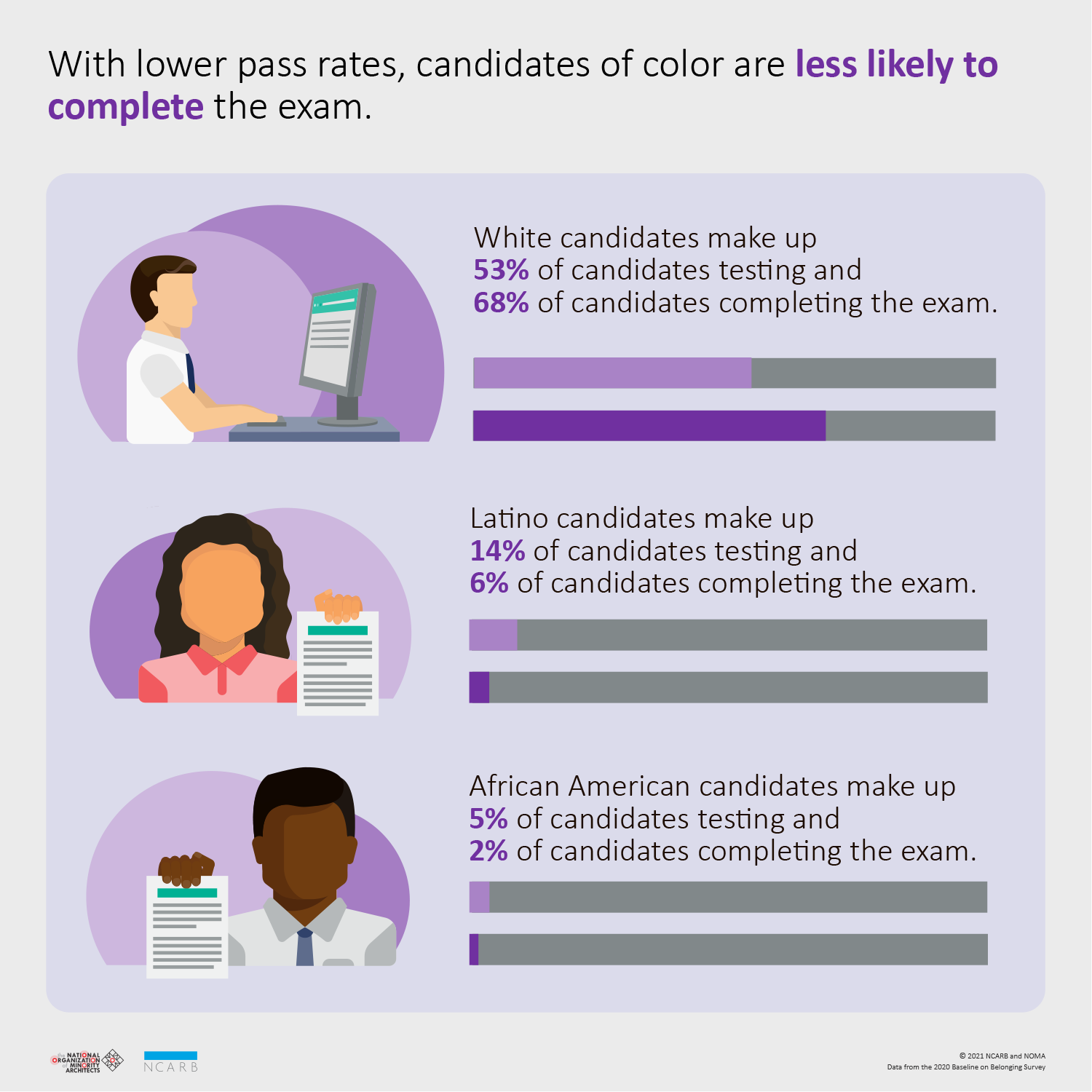 Both NCARB Record holder data and survey responses reveal that white candidates—especially white men—make up a disproportionately large percentage of candidates completing the exam, compared to the total population of candidates testing. On average, white candidates also complete the ARE roughly 7-8 months sooner than their African American and Latino peers. 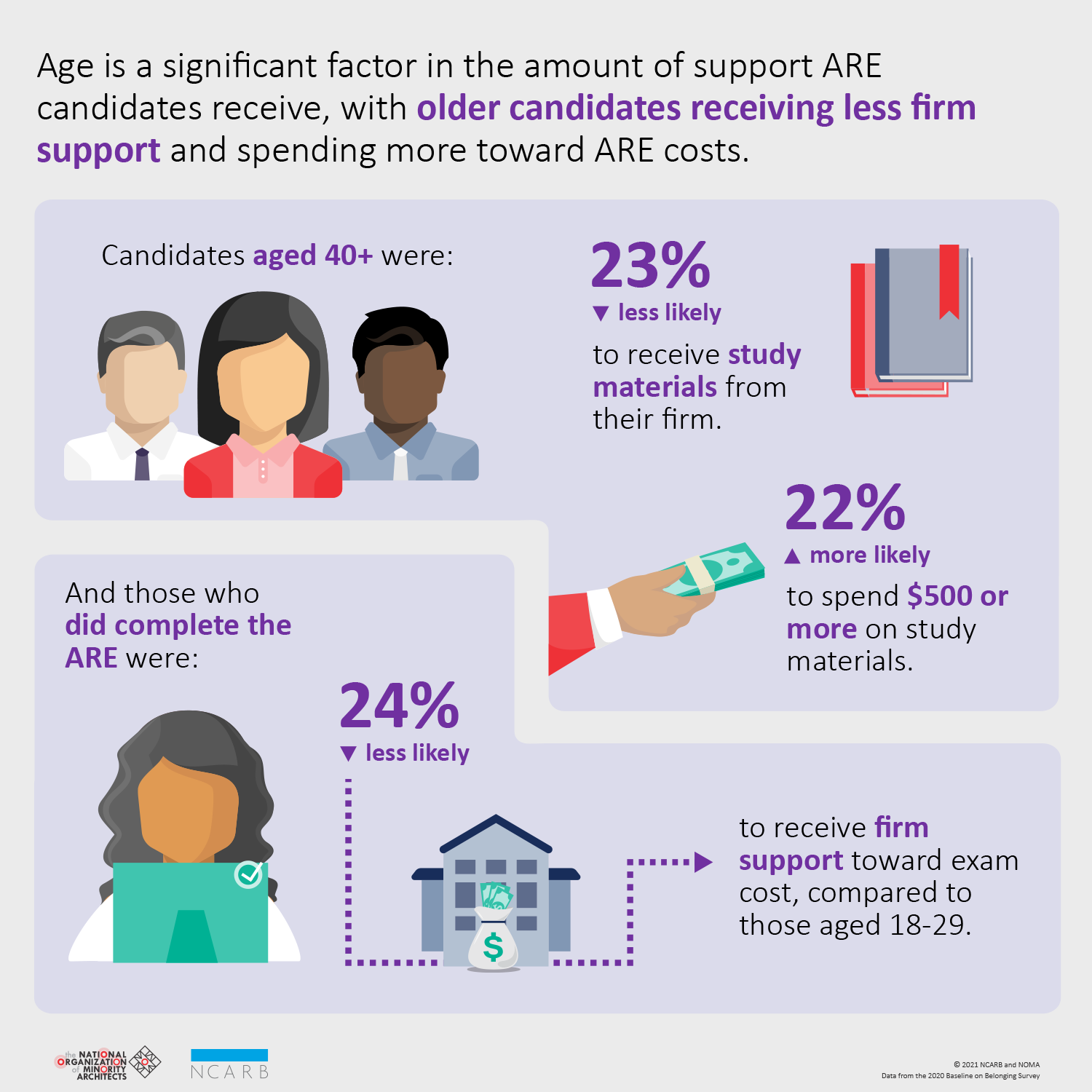 Although the Baseline on Belonging study is primarily focused on the impacts of race, ethnicity, and gender, survey data also illustrated the impact of a candidates’ age when it comes to navigating the exam. For example, firm support for the ARE—including free study materials and contributions toward the cost of the exam—drops significantly for candidates aged 40 or older. 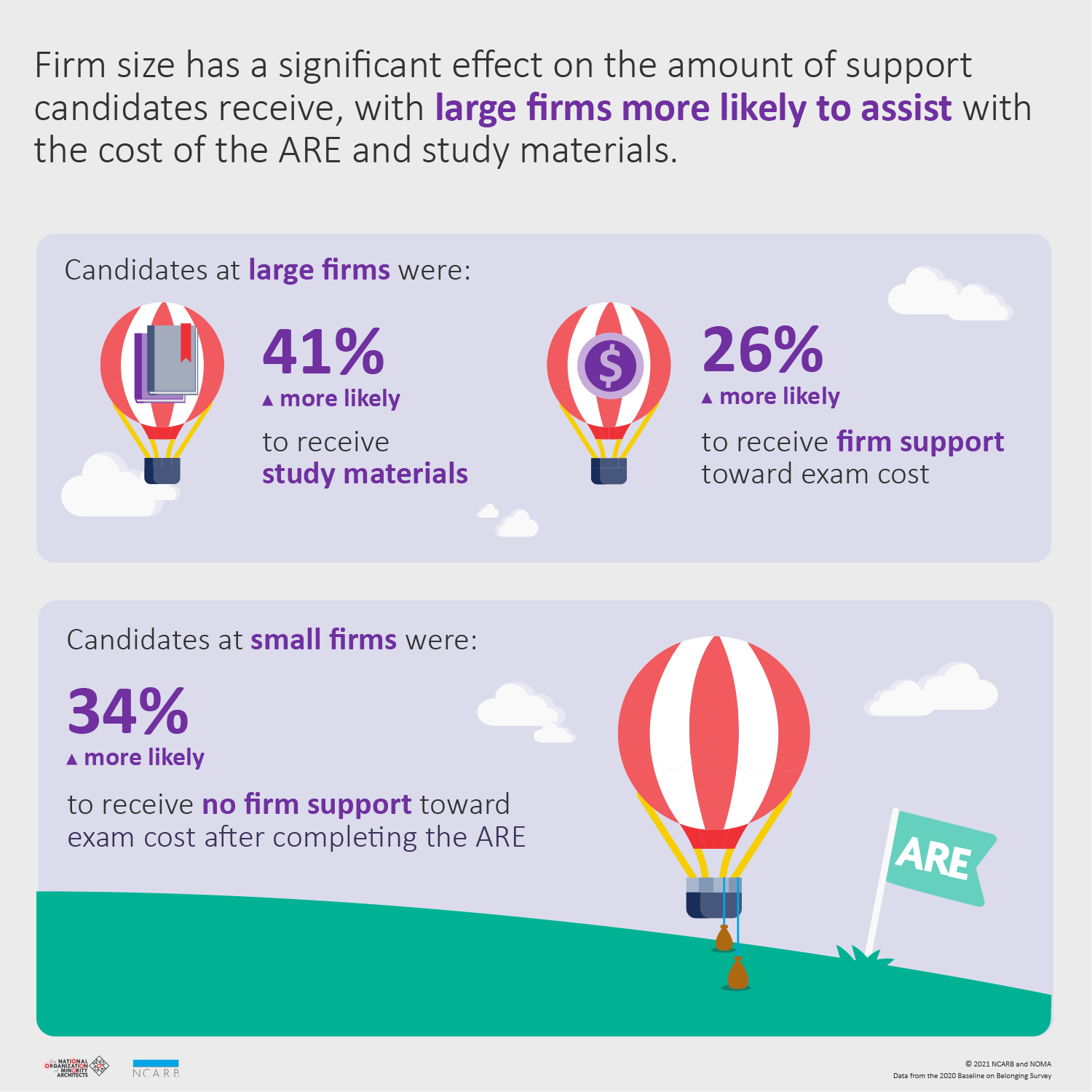 Viewing the survey responses by firm size also revealed significant disparities in the amount of support firms provided to their candidates, with large firms (100+ employees) more likely to provide free study resources or pay for the cost of the exam than small firms (1-19 employees). Although respondents from large firms were more than twice as likely to say their firm would pay for the cost of the exam compared to those at small firms, this did not make the respondents more confident in their ability to afford the ARE.

Next Steps
As NCARB and NOMA work toward solutions to help mitigate these disparities, understanding the core underlying causes is crucial. We plan to gain a deeper understanding of how these disparities affect candidates by conducting additional research via micro surveys and focus groups. In this next phase of research, we will explore questions like:

You can read the full Baseline on Belonging: Examination Report online.

Want to be involved in further study? Sign up to receive the latest updates from NCARB and NOMA.