Washington, DC—For the past decade, NCARB has helped shape national conversations about the architecture profession by providing exclusive data on the number of architects, the pathway to licensure, and demographics. This year marks the 10-year anniversary of the organization’s annual data publication, NCARB by the Numbers, which has grown in scope to include sections on attrition and representation along career stages.

The 2021 edition includes a new section on Architect Registration Examination® (ARE®) pass rates by several demographic categories. The six-division ARE, which is developed and administered by NCARB, is a key step on the path to earning an architecture license and is required by all state licensing boards.

Thanks to enhanced data science capabilities, NCARB is now able to segment and analyze pass rates from more than 32,700 test takers by demographic information, including race and ethnicity, gender, and age. Key findings—which will also be included in a joint report with the National Organization of Minority Architects (NOMA)—include:

“These findings, while not surprising to architects of color, are unacceptable,” said newly inaugurated NCARB President Alfred Vidaurri Jr., FAIA, NCARB, AICP. “I challenge us to do better. During my year as president, analyzing, understanding, and addressing these disparities will be a key focus—and I invite the entire profession to join us.”

Rethinking the Path to Licensure

Earning an architecture license generally takes over 12 years, which includes earning a college degree, reporting professional experience, and passing the ARE. In recent years, both architects and policymakers have questioned this framework, and NCARB has turned the microscope inward, resulting in a reduction of required experience hours, a restructuring of the ARE, and many other policy changes. Last year, CEO Michael Armstrong challenged the profession to consider accrediting four-year architecture degrees, which would help shave time and cost from the licensure path.

Following a preliminary internal data audit, NCARB commissioned an independent “bias study” of the exam, which showed individual questions do not drive disparities in candidate performance. Findings also emphasized that while the ARE is developed and evaluated in a way that minimizes unconscious biases—including assembling diverse volunteer groups to write and review exam content—NCARB cannot singlehandedly resolve inequity in exam access and performance. Coupled with NCARB’s data on career attrition, these studies suggest that pass rate disparities could also be impacted by access to education and professional experiences. 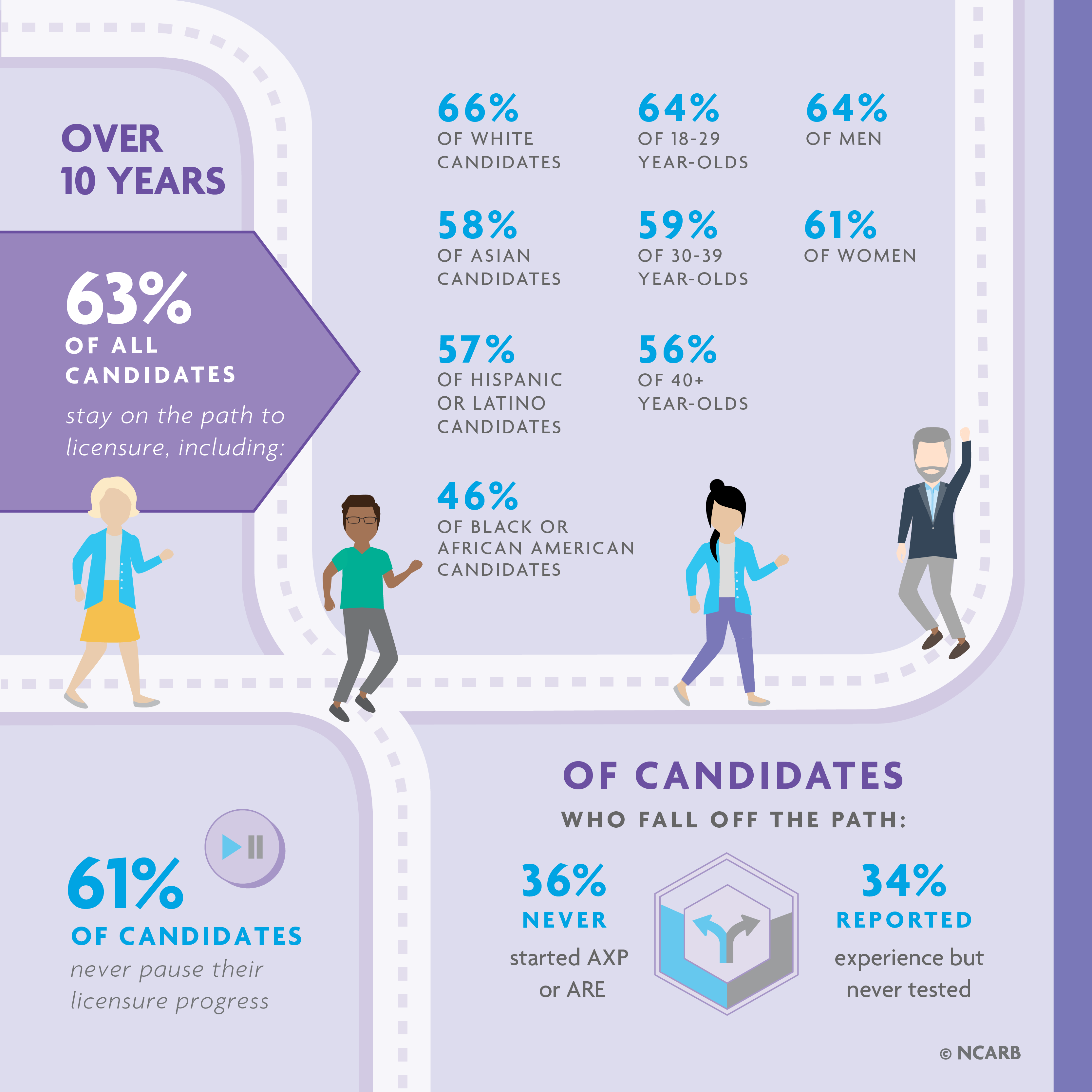 “One of the ways NCARB fulfils our mission to protect the public is by providing licensing boards with scientifically valid tools to measure competency, such as the ARE,” said Vice President of Examination Jared Zurn, AIA, NCARB, CAE. “While there is always more NCARB can do to ensure our programs are fair and accessible, we cannot do it alone. We are calling on firms, academia, test takers, and the entire architecture profession to help us resolve disparities and continue this serious, but necessary conversation about the path to licensure.”

NCARB’s data science and Examination teams have been actively working to understand the causes of testing disparities, assess internal design and development processes, consider next steps, and present solutions. To support all candidates, inform ongoing conversations regarding bias in the greater architecture community, and help address barriers to access, NCARB has pledged to launch the following changes, resources, and opportunities for feedback:

Additional details on these new initiatives will be released in the coming months. To learn more about NCARB and the licensing exam, visit www.ncarb.org.

The National Council of Architectural Registration Boards’ membership is made up of the architectural licensing boards of the 50 states, the District of Columbia, Guam, the Northern Mariana Islands, Puerto Rico, and the U.S. Virgin Islands. NCARB, in collaboration with these boards, facilitates the licensure and credentialing of architects to protect the health, safety, and welfare of the public.

To achieve these goals, NCARB works with its Member Boards and volunteers to develop and facilitate standards for licensure, including the national examination and experience program. NCARB also recommends regulatory guidelines for licensing boards and helps architects expand their professional reach through the NCARB Certificate. Connect with NCARB on  Twitter,  Facebook, and  YouTube.