Required by all 55 U.S. jurisdictions, the Architect Registration Examination® (ARE®) 5.0 is a six-part exam taken by candidates seeking architectural licensure. 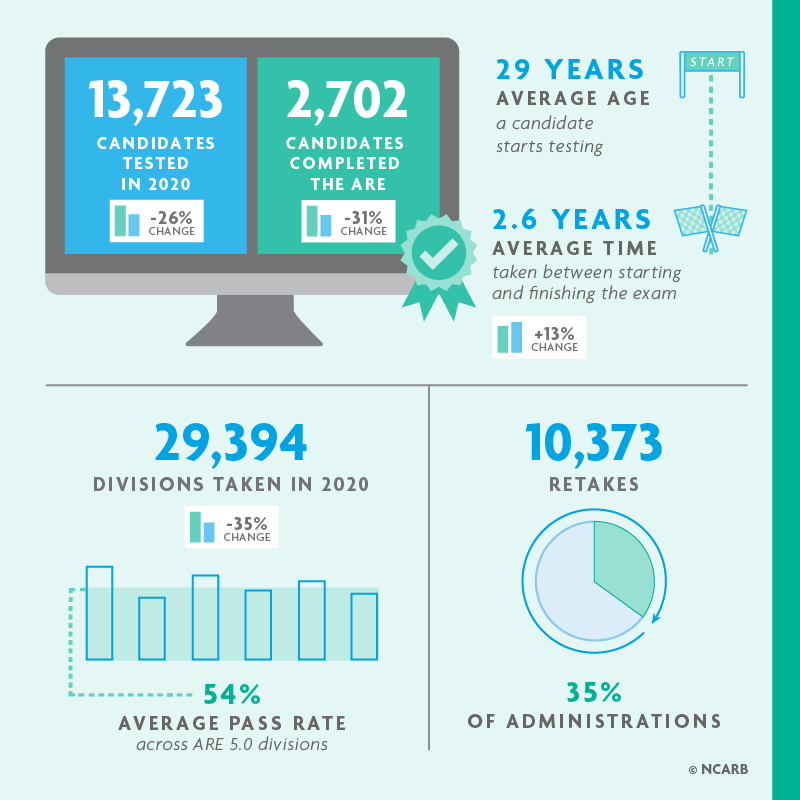 Just over 2,700 candidates completed the ARE in 2020, a 31 percent drop compared to 2019.  The average candidate took four months longer to finish the exam in 2020—primarily a result of the March-June Prometric test center closures during the pandemic.

The average success rate, which is the percentage of passed divisions out of all division attempts, increased by 2 percentage points to 54 percent. Candidates also performed more consistently across the divisions compared to 2019.

Changes NCARB implemented to the exam format in late December 2020, such as providing candidates with more time per question, are anticipated to support further increases in exam performance in 2021.

In 2020, just over 2,700 candidates completed the ARE. This is 31 percent fewer than the number of individuals who completed the exam in 2019.

Though a significant drop, 2020’s decline was almost certainly due to the closure of test centers across the U.S through the early months of the COVID-19 pandemic and ongoing limitations to testing availability as part of test centers’ COVID-19 mitigation measures.

The average candidate who completed the ARE in 2020 took 2.6 years, an increase of 13 percent—about four months—compared to 2019. This increase was almost certainly caused by the closure of test centers from mid-March to mid-June during the COVID-19 pandemic.

To prevent candidates’ progression from being impacted by test center closures, NCARB extended all candidates' rolling clocks (the time frame in which division scores are valid) by a total of 18 months during the pandemic.

The significant decline in time to complete the exam seen in 2015 came after NCARB greatly reduced the amount of time candidates must wait before retaking a failed division. Prior to October 2014, candidates had to wait six months to retake a failed division; now, they only have to wait 60 days.

Candidates can also attempt each division up to three times per 12-month period—a provision that is both necessary for exam security and encourages candidates to properly prepare before testing again.

There are two influencing factors for this trend. Test center closures in 2020 delayed candidates from testing for several months, and some candidates are likely to have delayed or deferred testing during the pandemic.

The peaks around 2016 and 2017 were also influenced by the transition from ARE 4.0 to ARE 5.0, when the option of strategic testing enabled candidates to complete the ARE in as few as five divisions.

The division with the biggest change was Project Development & Documentation (PDD), which had a 7 percentage point increase in candidate performance since 2019. For comparison, the average success rate across all six divisions was 54 percent—a 2 percentage point uptick compared to 2019.

ARE 5.0’s success rate, or the average of all division pass rates, increased by 2 percentage points between 2019 and 2020. At slightly over 54 percent, 2020 saw the strongest collective exam performance by candidates since the launch of ARE in 2016.

Changes to the exam format in mid-December 2020, which provided candidates with more time per question and fewer questions per division, are anticipated to support further improvements in candidate performance in 2021.

An assessment of ARE 5.0 division pass rates over time reveals a noticeable convergence in 2020.

In 2019, pass rates ranged from 42 percent for Project Planning & Design to 70 percent for Construction Evaluation—a range of 28 percentage points. Though these two divisions still marked the upper and lower thresholds for average pass rates in 2020, they shifted to 66 and 45 percent, respectively—a range of only 21 percentage points. This indicates that candidates are performing more consistently across the different divisions.

NCARB’s staff, expert volunteers, and testing consultants continuously evaluate ARE 5.0 results to ensure that the exam is fair, valid, and measures an appropriate level of competency.

2020 data shows the average pass rate for all ARE 5.0 divisions is higher for first attempts than it is for retakes.

In contrast, the smallest difference in pass rates was seen for the Practice Management (PcM) division, which saw only a 4 percentage point decrease in average pass rates following the first attempt.

The total number of tests administered in 2020 fell significantly to 29,394 divisions—a 35 percent drop from 2019. The driving factor for this decrease was the closure of test centers between mid-March and mid-June due to the COVID-19 pandemic, as well as the continued limitations to testing availability as part of test centers’ COVID-19 mitigation measures.

Additionally, just under two-thirds (19,021) of the tests administered in 2020 were first-time attempts. The remaining third (10,373) were retakes. Proportionally, this was the same ratio of first attempts to retakes as seen in 2019.

Of the 29,394 ARE 5.0 tests administered in 2020, nearly 6,000 of them were for the Practice Management division—including over 4,000 first attempts and over 1,800 retakes. Project Planning & Design saw the largest number of retakes, with 2,952 candidates repeating this division in 2020. This is unsurprising given this division had the lowest pass rate at 45 percent.

Construction & Evaluation had the fewest administrations in 2020, influenced by high pass rates that reduced the need for retakes.

Of the licensure candidates who completed the ARE in 2020, 61 percent took at least one division prior to completing the experience program. This is the same percentage as seen in 2019.

Currently, 52 of the 55 licensing boards allow candidates to overlap gaining experience with taking the ARE.

For most races/ethnicities, the same trend of men outperforming women was seen across most exam divisions. The exception was candidates who identify as Black or African American: African American women had higher pass rates than their male counterparts on four of the six ARE 5.0 divisions.

Hispanic or Latino candidates were the only race/ethnicity where women perform worse than men on all divisions, and experienced the greatest overall disparity in pass rates between men and women.

For all divisions of ARE 5.0, candidates between the ages of 18-29 had the highest pass rates, while candidates who were 40 or older had the lowest.

This gap is the largest on the Programming & Analysis and Project Management divisions, where 18-29-year-olds outperform candidates who were 40-plus by 14 percentage points. Compared to 18-29-year-olds, candidates who were 30-39 had slightly lower pass rates on all ARE 5.0 divisions, ranging between 3-4 percentage points lower.