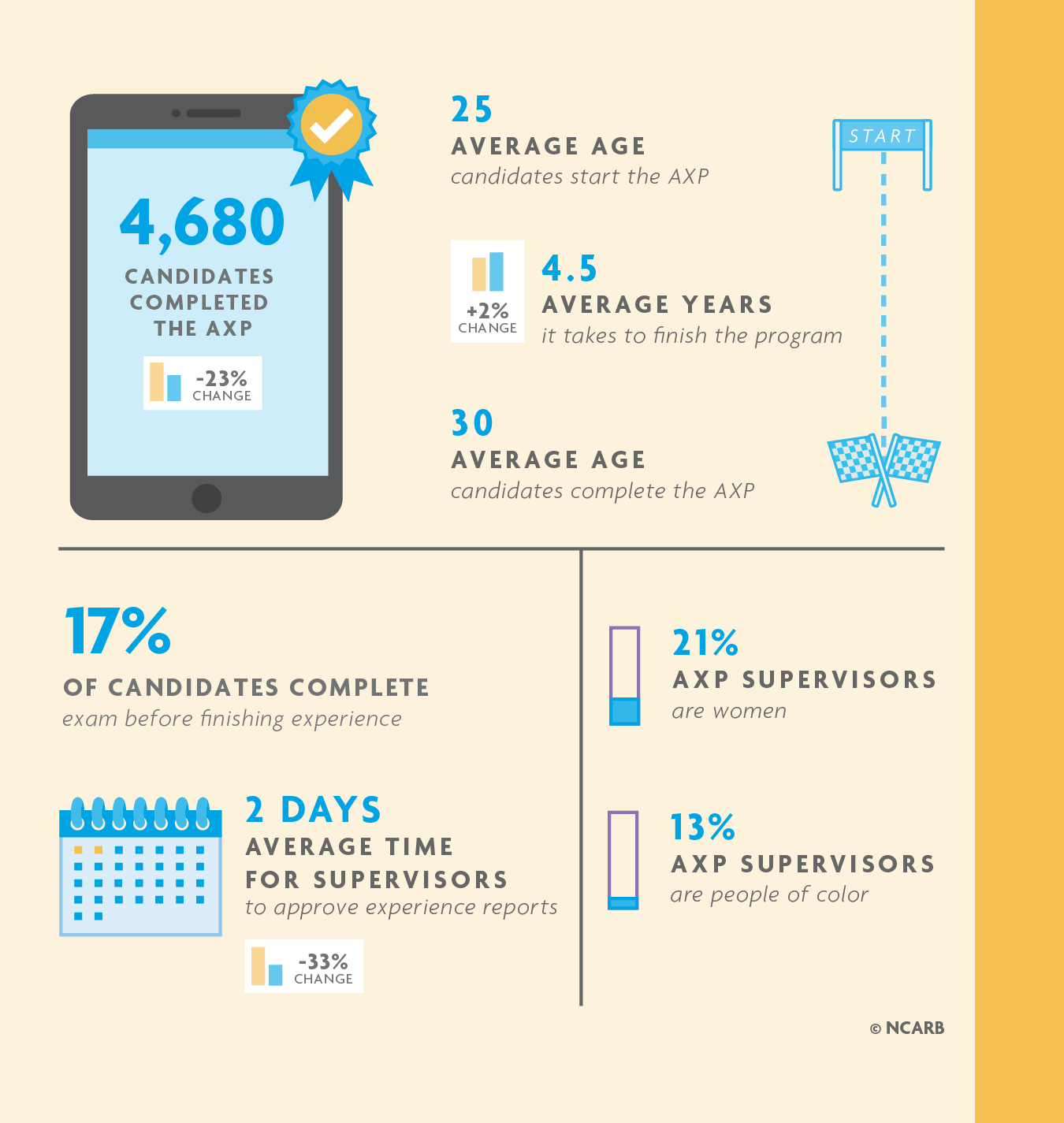 Unsurprisingly, candidates in 2020 faced unprecedented hurdles that made it difficult to gain program experience due to a variety of challenges brought on by the COVID-19 pandemic.

The number of candidates who completed the AXP fell sharply to 4,680 total completions. This is 23 percent fewer AXP completions than in 2019 and well below the decade’s average of 5,354.

Nonetheless, 2020 data shows that candidates continue to earn and record experience earlier, often while in college—a trend NCARB expects to increase in the coming years. On average, candidates who finished the AXP in 2020 took 4.5 years to complete the program—one month longer than candidates in 2019.

In 2020, nearly 4,700 candidates completed NCARB’s experience program. This is 23 percent fewer candidates than in 2019. This sharp decline can likely be attributed to the uncertain economy throughout the COVID-19 pandemic, which may have resulted in fewer opportunities for candidates to gain firm experience.

Additionally, the overall decreasing trend seen over the last four years reflects a return toward normal rates, after a large number of candidates completed the program in 2016-2017 (leaving fewer candidates in the pool to complete the program in the following years).

The average licensure candidate who completed the AXP in 2020 took 4.5 years, an increase of 2 percent—slightly more than one month—compared to 2019. The slight increases seen from 2017 to 2020 suggest that the time spent completing the experience requirement is stabilizing after the initial impact of several program updates made earlier in the previous decade.

The time it takes to complete the experience program has remained between 4.2 and 4.5 years since the removal of the program’s elective hours in 2015, which reduced the number of required hours by about a third. Two additional program updates—allowing candidates to report experience older than six months (2014) and realigning experience areas (2016)—contributed to the overall drop in the amount of time candidates take to complete the program.

While neither age has shifted dramatically in recent years, NCARB’s ongoing outreach program to architecture students and the Integrated Path to Architectural Licensure (IPAL)—which allows students to complete the AXP and take the national licensing exam while in school—aim to encourage candidates to begin recording their professional experience sooner.

Of the candidates who completed the path to licensure in 2020, approximately 17 percent finished the Architect Registration Examination® (ARE®) before they completed their experience, the same proportion seen in 2019.

The gradual downward trend since 2016 of candidates completing the exam before completing the AXP is likely linked to the alignment of the AXP and ARE. Candidates appear to favor completing an experience area before taking the corresponding exam division.

On average, most experience reports in 2020 were reviewed and approved by a supervisor within just two days of the report’s submission. This reduction in approval time reflects improved technology and corresponding supervisor familiarity with the digital review and approval process.

Prior to 2009, experience was reported via mailed paper forms. In June 2010, NCARB implemented online experience reporting and began requiring candidates to report experience within six months of earning it for full credit. These changes contributed to the reduction in approval time from 2011-2013.

The proportion of AXP supervisors who were people of color did not change from 2019, remaining at around 13 percent. Following white supervisors, Asians were the next most represented at 7 percent of the total supervisor population.

Though 2020’s data shows slight increases in the representation of women among AXP supervisors across the past decade, the slow progress highlights the ongoing need to support equity and inclusion efforts for historically underrepresented groups within the architecture profession.