Gender representation and racial and ethnic diversity both saw significant increases in 2020 at several key stages on the path to licensure. 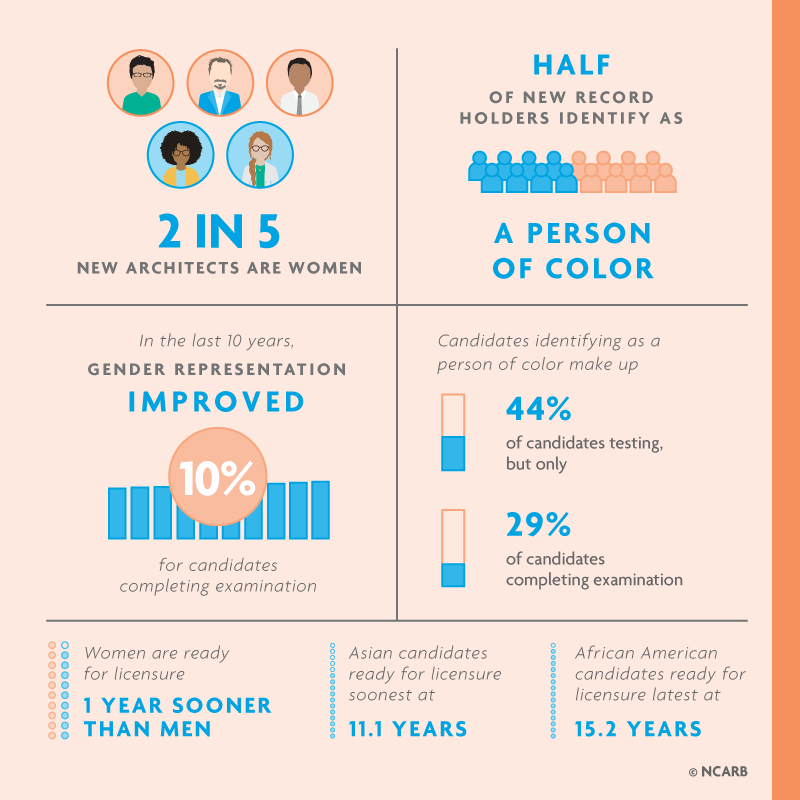 NCARB continued to see near equal representation of men and women early on the path to licensure, with women accounting for 47 percent of individuals reporting hours toward the experience program and 46 percent of individuals testing. Additionally, 2020 saw continued slight increases in gender representation along later career stages, including a 3 percentage point increase in the proportion of new women architects to 41 percent.

However, it is worth noting that 2020’s increases in racial and ethnic diversity are limited to the Asian and Hispanic or Latino population. The proportion of African American candidates in the profession has seen little change over the past decade and continues to be underrepresented when compared to the U.S. Census data.

Though women and people of color remain underrepresented within the profession overall, 2020’s data suggests that the gradual improvements in early career stages seen in recent years are beginning to filter through to later stages on the path to licensure.

This page contains data about demographics for career stages and the time to licensure. For program-specific data, see  Demographics: AXP and ARE.

Though NCARB is not currently seeing equal proportions of men and women at any career stage, the steady increase in the proportion of women in the profession (including female licensed architects, who now represent 24 percent of the architect population) indicates that the profession continues to make progress toward gender parity.

The proportion of candidates of color who completed the licensure path and became architects (roughly 29 percent) increased by 4 percentage points compared to 2019. The proportion of all architects who are people of color stayed the same from 2019 to 2020, at 16 percent.

While these increases in diversity are significant, they are confined to the Asian and Hispanic or Latino communities. The proportion of candidates identifying as Black or African American has not changed at most career stages, and African Americans continue to be underrepresented in the architecture profession when compared to U.S. Census data.

Additionally, over half (53 percent) of women who started an NCARB Record in 2020 identified as a person of color, with the majority identifying as Asian (21 percent) or Hispanic or Latino (20 percent).

For men in the profession, racial and ethnic diversity increased at most career stages in 2020. Nine percent of new male architects, for example, now identify as Hispanic or Latino.

On average, women consistently complete their education, experience, and examination requirements sooner than their male peers. In 2020, the average woman completed the path in roughly 11.9 years, similar to previous years. Men took 12.9 years on average to complete the path, approximately 2 months sooner than in 2019.

The difference between the average time each gender takes to complete the licensure path has remained relatively steady in recent years, widening by just two months compared to the gap seen a decade ago.

In 2020, Asian candidates were ready for licensure sooner than their peers, finishing the path in 11.1 years. This is over a year sooner than candidates of any other race or ethnicity. Black or African American candidates taking the longest at 15.2 years.

For comparison, the average overall time to licensure in 2020 was 12.3 years—similar to the time seen for white and Latino candidates (12.4 and 12.3 years, respectively).

While most racial or ethnic groups have reduced their average time to licensure at least slightly since 2017, the average Black or African American candidate took over a year longer in 2020 than they did in 2017.

Note: NCARB does not have sufficient demographic data to show the average time to licensure by race/ethnicity beyond 2017, or for candidates who identify as Native Hawaiian/Pacific Islander or Native American/Alaskan Native (these individuals are included in the “Other” category.

To help provide a clearer picture of the differences in time to licensure by age, NCARB compares the time from the date a candidate started their NCARB Record to the date they completed their final licensure requirement—as opposed to other “time to licensure” charts, which use the date a candidate began their college degree as the start date. This provides a more accurate comparison for older candidates, who may have earned an unrelated degree earlier in their careers.

Candidates in the 18-29 age group completed the licensure process the soonest, taking just 5.2 years on average. This is over two years sooner than those in the 30-39 age group, who took an average of 7.6 years.

Note: The pool of candidates over 55 years old is very small, which can lead to dramatic fluctuations in time to licensure from year to year.

Licensure candidates and NCARB Certificate holders can be found in many countries across the globe. Outside of the United States, the largest population of Record holders are based in Canada (730), the United Kingdom (118), the Republic of Korea (106), and China (100). These numbers represent slight increases from 2019, though these numbers have not shifted much over the past several years.