Earning a degree from an architecture program accredited by the National Architectural Accrediting Board (NAAB) remains the most common path for candidates seeking architectural licensure in the United States. Data continues to show that, on average, licensure candidates with a degree from a NAAB-accredited program have greater success when taking the ARE. The NAAB’s 2020 data also reveals that both new and total enrollment in accredited programs continue to increase. And, after remaining steady for the past two years, the number of graduates from NAAB-accredited programs increased slightly to just over 6,000. Approximately 59 percent of those degrees were earned at Master of Architecture programs.

The number of students enrolled in IPAL programs continues to increase, with 650 students across the United States as of the 2019-2020 school year. Additionally, roughly 53 percent of newly licensed architects started their NCARB Record while in school, suggesting that NCARB’s continued efforts to raise early awareness of the licensure process are helping students make early progress on their path.

Just over half of new students are women (51 percent), which is 4 percentage points higher than the proportion of female candidates reporting experience. This suggests that NCARB may see greater gender representation on the licensure path in the years to come.

Nearly 27,000 students were enrolled in a NAAB-accredited program in the 2019-2020 school year, an increase of 4 percent compared to the previous academic year. This is the third consecutive year of steady increases.

In 2020, 6,079 degrees were awarded by NAAB-accredited programs across the country, a 2 percent increase compared to the previous school year. This is only slightly lower than the average number of graduates seen over the past decade (6,145).

Of all individuals who completed the path to licensure in 2020, 53 percent started their NCARB Record while in school—a 3 percentage point increase from 2019. This proportion has more than doubled in the past decade and may reflect NCARB’s efforts to encourage candidates to start the path to licensure early.

Creating an NCARB Record is considered one of the first steps on the path to licensure because it enables students to begin reporting experience. The growing trend of architects starting their Record in school (and having more overlap between education, experience, and education) may lead to decreases in the amount of time to complete licensing requirements for future candidates.

Note: Historical data can shift because licensure candidates can backdate AXP experience up to five years.

Similar to the previous year, roughly 86 percent of licensure candidates who completed the path to licensure in 2020 held a degree from a NAAB-accredited program.

While this percentage has seen little fluctuation over the years, the proportion of graduates who hold a degree from a NAAB-accredited program has decreased by 5 percentage points after a peak in 2016 at 91 percent.

Similar to 2019, this is a reversal of the historical trend where graduates from accredited programs typically completed the exam several months before their counterparts.

Because most candidates hold a degree from a NAAB-accredited program, this shift is likely influenced by the recent increase in the amount of time candidates take to complete the exam (see Time to Complete Exam Increases).

Historically, candidates from accredited programs outperform their peers by 6 to 9 percentage points. The average ARE 5.0 success rate increased by 2 percentage points in 2020 (see ARE Success Rate Shows Slight Improvement).

IPAL Students Across the U.S. 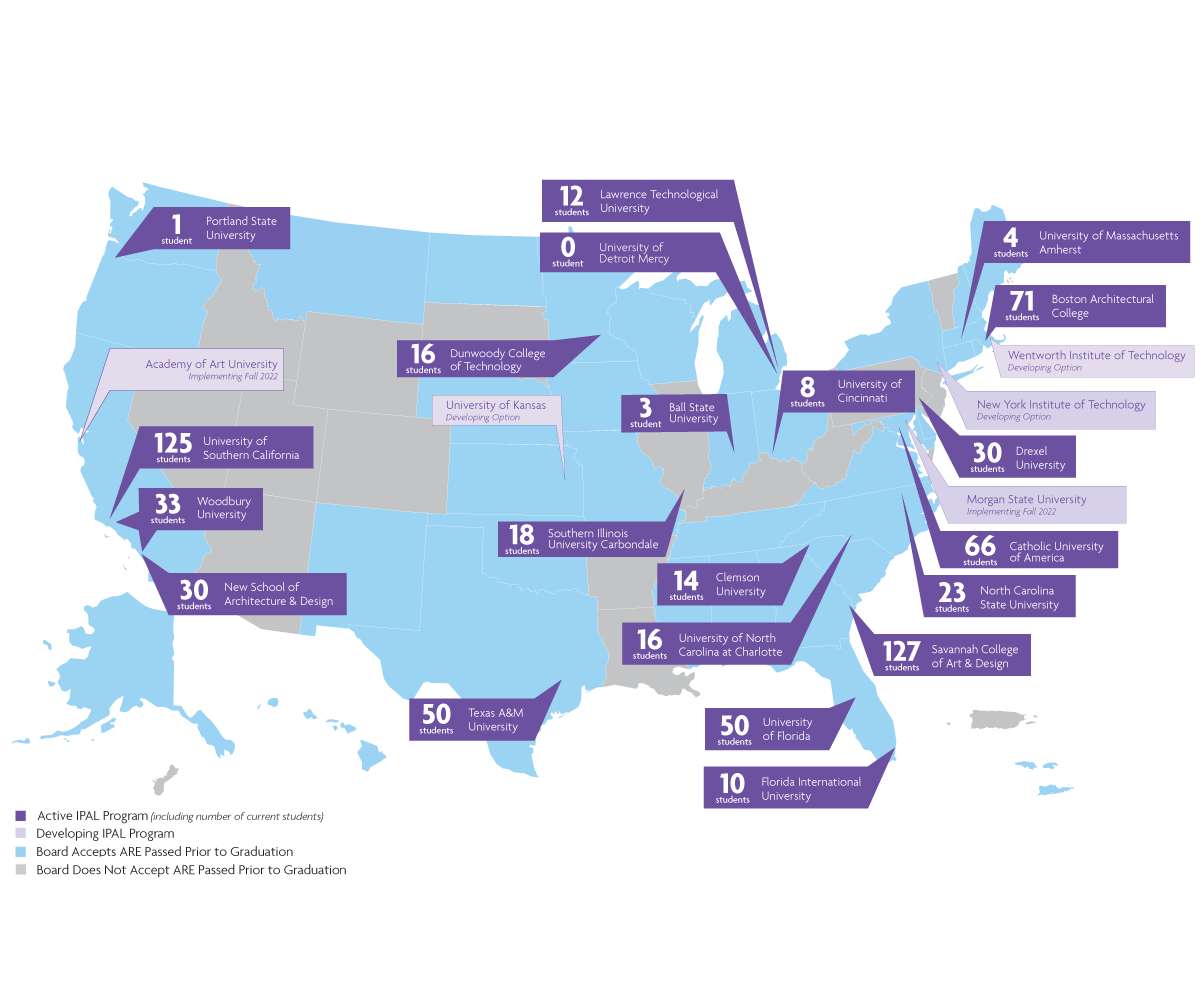 There are currently 28 NAAB-accredited programs at 23 colleges participating in NCARB’s Integrated Path to Architectural Licensure (IPAL) initiative, which launched in 2015.

The IPAL option—offered as an additional path within an existing NAAB-accredited program—seeks to shorten the time it takes to become an architect for students dedicated to earning a license. Participating programs provide students with the opportunity to complete the AXP and take all six ARE 5.0 divisions prior to graduation.

As of the 2019-2020 school year, nearly 650 students had enrolled in IPAL options across the United States, and nearly 80 have begun taking the ARE. Currently, 33 boards will accept licensure applications from candidates who have completed the ARE prior to graduation through an IPAL program.

Note: Enrollment data is from the 2019-2020 school year. Some accepted programs are still developing their IPAL options.