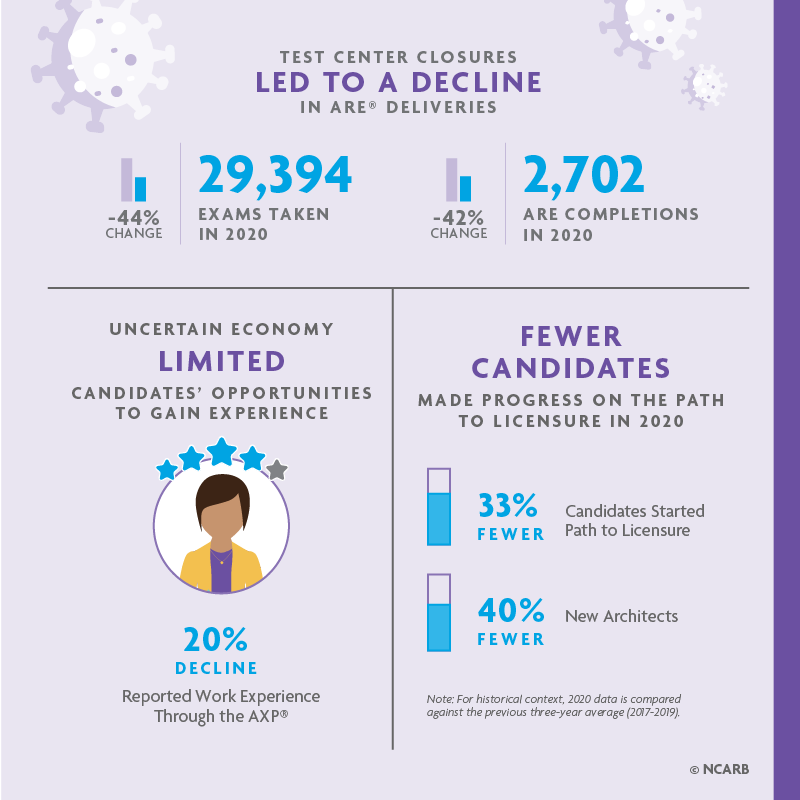 The COVID-19 pandemic has profoundly impacted industries around the world—and NCARB’s data suggests the field of architecture is no exception. Factors like the March 2020 closure of Prometric test centers, the transition to remote work for many firms, and changes in demand for architectural services are key factors to consider when analyzing licensure trends during the year.

Throughout 2020, NCARB carefully tracked candidates’ progress through the Architectural Experience Program (AXP) and Architect Registration Examination (ARE)—as well as other key licensure metrics—to understand how the pandemic was impacting their ability to meet career goals in real time. This special report offers a month-by-month review of those key metrics, compared against averages from the previous three years (2017-2019).

The number of candidates submitting AXP reports initially dropped in spring 2020 as COVID-19 began spreading throughout the United States, followed by a slight recovery over the summer.  Following historical trends, the number of candidates submitting experience dipped again in the fall, but remained consistently below the previous three-year average.

Just over 25,000 candidates submitted experience reports in 2020, compared to the previous three-year average of 31,400—representing a 20 percent drop across the year.

Although the experience program is designed to accommodate remote work and supervision, factors like increased unemployment, delays to architecture project schedules, and other changes to firms’ day-to-day work likely contributed to the reduction in candidates’ reporting.

Prometric test centers across North America closed in mid-March through June, in compliance with local restrictions and regulations related to COVID-19. This led to a near elimination of exam deliveries from April to June. This pause led to a 44 percent drop in 2020 exam deliveries (around 29,400), compared to the previous three-year average of 52,300.

When test centers re-opened, the number of deliveries rose quickly in July and subsequently returned to near-pre-pandemic levels before dropping off again in November. The larger dip in December is likely related to the mid-month launch of an online-proctored option.

Because completing the ARE is typically the final step toward earning a license, the number of newly licensed architects tracks closely with the number of exam completions.

The March-June 2020 Prometric test center closure meant that candidates who still needed to pass the exam were unable to complete licensure requirements for nearly four months. This led to a 40 percent decrease in the number of new architects in 2020 (nearly 2,900), compared to the previous three-year average of 4,800.

Once test centers re-opened in June, the number of candidates completing the licensure process returned to near-normal rates for the remainder of the year.

Creating an NCARB Record is often the first step on the path to licensure, because candidates use their Record to document their professional experience (AXP) and examination requirements (ARE).

Just over 5,800 candidates started a new NCARB Record in 2020—a 33 percent decrease compared to the previous three-year average of 8,800. Going into the pandemic, new Record creations were on par with historical trends before dipping dramatically March. Numbers remained low in the first half of 2020 as the pandemic spread across the United States, before making a slight recovery over the summer months.

The historical peaks in January and over the summer could be tied to the start of winter and fall semesters, as college students document professional experience earned over breaks. Since many of these opportunities diminished with the pandemic, it follows that fewer architecture students and recent graduates created NCARB Records in 2020. These trends highlight the pandemic’s impact on the availability of entry-level roles during 2020, plus a lack of early career opportunities like internships.

Applications for Out-of-State Licenses Less Impacted by the Pandemic

When candidates apply for initial licensure or architects apply for reciprocal (or out-of-state) licensure, NCARB reviews and sends their NCARB Record to the licensing board. In 2020, transmittals for both initial and reciprocal licensure applications dropped during the spring and began to recover slightly over the summer months.

In contrast, the number of transmittals for reciprocal licensure applications was high coming into 2020. During the first few months of the pandemic, applications fell dramatically before peaking again in June. Numbers then remained relatively strong throughout 2020, falling by only around 3 percent overall compared to previous years.